Boeing Completes Delivery of Apache And Chinook Helicopters to India, Thanks IAF for 'Partnership' 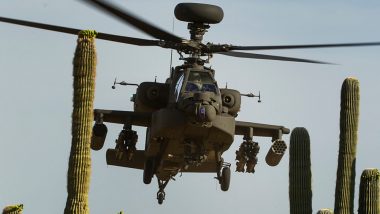 New Delhi, July 10: United States-based defence manufacturing company Boeing has completed delivery of all the 22 AH64-E Apache and 15 CH-47F Chinook helicopters to India. Boeing thanked the Indian Air Force for its “partnership”. The final five of the 22 Apache attack helicopters were handed over to the IAF at Air Force Station, Hindan. Earlier in March, Boeing handed over the last five of 15 CH-47F(I) Chinook heavy-lift helicopters to the IAF.

In a tweet, Boeing India said, “Thank you, @IAF_MCC, for your partnership. We’re happy to have completed the deliveries of the 22 #AH64-E Apache and 15 #Chinook helicopters to India.” Surendra Ahuja, managing director, Boeing Defence India, said, “Customer centricity, commitment to the modernization and mission-readiness of India’s defence forces are key values to our partnership with India.” Chinook Helicopters Join Indian Air Force Fleet; Here's All You Need To Know About The CH-47F Heavy-Lift Chopper.

Thank you, @IAF_MCC, for your partnership. We’re happy to have completed the deliveries of the 22 #AH64-E Apache and 15 #Chinook helicopters to India. pic.twitter.com/MLAFFXvWIe

Ahuja added, “With this delivery of military helicopters, we continue to nurture this partnership and are fully committed to working closely with India’s defence forces to deliver the right value and capabilities to meet their operational needs.” India is one of the 17 nations, which opted for the most advanced variant, the AH-64E Apache. This variant is also flown by the US. Meanwhile, 20 nations, including India either have Chinooks in service, or are on contract to receive them. IAF Apache Helicopter Makes Emergency landing in Punjab's Hoshiarpur Due to Technical Glitch.

In 2015, India signed a USD three billion deal to buy 22 Apache and 15 Chinook helicopters with Boeing and the government of the United States. India fast-tracked delivery of the last batch of the Apache attack choppers amid border standoff with China along the Line of Actual Control in Ladakh. IAF has also deployed Apache helicopters along the LAC amid the standoff.

(The above story first appeared on LatestLY on Jul 10, 2020 03:59 PM IST. For more news and updates on politics, world, sports, entertainment and lifestyle, log on to our website latestly.com).