Farm Bills to be Repealed: What Were The 3 Legislations Brought by Modi Government? Why Farmers' Protest Began? All You Need to Know

Prime Minister Narendra Modi on Friday announced that his government has decided to repeal the three farm laws. 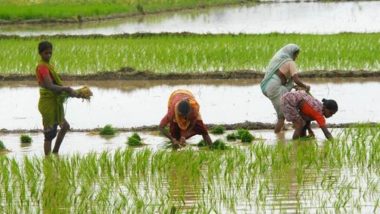 New Delhi, November 19: Prime Minister Narendra Modi on Friday announced that his government has decided to repeal the three farm laws. The Narendra Modi government had introduced three legislations - Essential Commodities (Amendment) Bill, 2020, Farmers' Produce Trade and Commerce (Promotion and Facilitation) Bill, 2020 and Farmers (Empowerment and Protection) Agreement of Price Assurance and Farm Services Bill, 2020. While the government had said the three legislations will increase farmers' income and investment in the agriculture sector, other parties, including Shiromani Akali Dal, a former BJP ally, said otherwise. Groups of farmers had also launched protests against the three Bills. Farm Laws to be Withdrawn: Rakesh Tikait Says Farmers' Protest Will End Only After Bills Are Repealed Officially in Parliament.

What Were The Three Agriculture Bills?

The Farmers' Produce Trade and Commerce (Promotion and Facilitation) Bill, 2020, seeks to give freedom to farmers and traders to sale and purchase of their choice. It promotes the inter-state and intra-state sale of farmers' produce outside the local markets. It also permits the electronic trading of farmers' produce.  Farm Bills Withdrawn: 'We Have Decided to Repeal Three Farm Laws,' Says PM Narendra Modi in Address to The Nation on Guru Nanak Jayanti 2021.

What The Government Had Said:

The government was of the view that these Bills were pro-farmers and could open new businesses opportunities for farmers that will result in higher prices of their produce and increased income. "These steps are only the latest in a series of measures taken by the government, which shows its continuous commitment to championing the cause of welfare of the farmers of India," Agriculture and Farmers' Welfare Minister Narendra Singh Tomar had said while tabling two of the legislations.

"These Bills are very far-sighted. They are in the process of being passed as Acts in the Parliament. These Bills will rapidly increase the price of produce of the farmers. These Bills will also help increase investment in the agriculture sector," Rajya Sabha MP and BJP President Jagat Prakash Nadda had said.

Why Farmers Began Protesting Against The Three Bills:

Various groups and unions of farmers launched protests against the three legislations. They said the three Bills will lay the foundation for suspension of the minimum support price (MSP) system. "The Union government wants to crush the commission agents and the farmers by enacting the three new laws. The government's assurance that the MSP will not be withdrawn and they will be free to sell their produce to private companies is dubious and cannot be trusted," Preet Singh, the district president of Akhil Bhartiya Kisan Sabha was quoted by India Today as saying. Farmers Will Protest Outside Parliament Against Farm Bills: Haryana BKU Leader.

They also feared that the traditional grain market system will be finished and small farmers will suffer losses as they won't be able to seal an agreement with big retailers or wholesale buyers. While the Bills could remove commission agents who currently facilitate trade between farmers and buyers, farmers wanted this procedure to remain intact.

It is because small and medium farmers depend on these commission agents for finances to sow the crop and sale of their produce. If these commission agents are gone, they won't have money to buy seeds and other equipment for farming as banks hesitate to lend. Farmers also feared that once big private companies will enter the agriculture sector, they will capture it and traditional wholesale markets will shut.

"The protest will be indefinite if the ordinances are not withdrawn. We will go to New Delhi and will be compelled to take extreme steps. The farmers are already stressed and are committing suicides every day. If these ordinances became law, they will destroy agriculture," Sahab Singh, leader Bhartiya Kisan Union (BKU), had said.

While the three bills will now be withdrawn, Rakesh Tikait, BKU leader said that the farmers' protests will end once the laws are withdrawn officially in Parliament.

(The above story first appeared on LatestLY on Nov 19, 2021 11:27 AM IST. For more news and updates on politics, world, sports, entertainment and lifestyle, log on to our website latestly.com).