Five-Feet-Long Crocodile Found Inside Toilet of a House in Mohabbatpur Village in UP’s Firozabad, Later Released Into River; See Pics 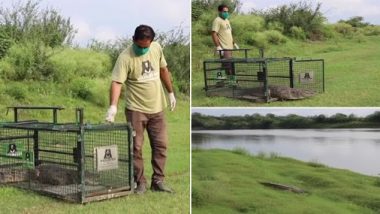 Lucknow, July 31: In a bizarre incident, a five-feet-long crocodile was found inside a toilet of a house in Mohabbatpur village of Uttar Pradesh, resulting in chaos. The incident took place in Firozabad district of the state on Wednesday. According to a tweet by ANI, the five-foot-long reptile, that managed to perch in the toilet, was later rescued by an NGO and released into the river. Reports inform that as soon as the family found the reptile in the toilet of their house, they panicked and called their neighbours to help them.

According to reports, the villagers believed that the crocodile had perhaps wandered out of the village pond and found shelter in the toilet. Soon after the locals gathered near the house, they barricaded the bathroom and informed the local police which alerted the Forest Department. Odisha Shocker: Crocodile Allegedly Killed, Eaten by Villagers in Malkangiri District.

Crocodile found inside toilet of a house in Mohabbatpur: See Pics

Firozabad: A crocodile was found inside a toilet of a house in Mohabbatpur village, resulting in chaos. The reptile was later rescued by an NGO and released into the river. pic.twitter.com/yv2vxRDyL5

The Forest Department pressed their teams into service in the rescue operation. The team placed a trap cage with food bait at the bathroom door to lure out the crocodile. In a few minutes, the crocodile was inside the trap cage and it was later released in the Yamuna at Narangi Ghat, Bateshwar.

A similar incident was reported in June when a seven-foot-long crocodile was rescued from a village in Shikohabad, a nearby area. Crocodiles are a native to the Indian subcontinent and are most commonly found in freshwater environments such as rivers, lakes, streams, village ponds and man-made reservoirs.

(The above story first appeared on LatestLY on Jul 31, 2020 03:35 PM IST. For more news and updates on politics, world, sports, entertainment and lifestyle, log on to our website latestly.com).