"Please make us aware of any difficulties that you may face in the app initially, and we will work towards resolving them. Our aim is to involve every agency and department, be it DDA, MCD, Delhi government, to strengthen our 'Yuddh, Pradushan Ke Viruddh'," added the CM. 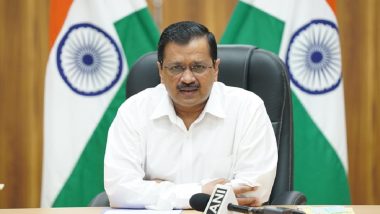 Chief Minister Arvind Kejriwal on Thursday launched the 'Green Delhi' App to increase citizen participation and ensure timely action in Delhi's fight against pollution. Among a slew of anti-pollution measures announced earlier this month under the 'Yuddh, Pradushan Ke Viruddh' campaign, CM Arvind Kejriwal had said that the Delhi government will launch a photo, audio, and video-based 'Green Delhi' app to enable citizens of Delhi to report pollution violations and local sources of pollution in the city, such as garbage burning, dust due to construction activities, industrial activities, and other local pollutants. He said that a complaint lodged on the App will be received by the concerned departments, which will have to resolve the complaints in a time-bound manner, as per the specified timelines for different types of complaints.

CM Arvind Kejriwal said, "The people of Delhi are suffering due to rising pollution levels in the city. In the last five years, pollution has reduced by 25% due to several measures taken by the Delhi government and the people of Delhi. This year too, efforts are being made to reduce pollution, such as shutting down of thermal power plants in Delhi, shifting 95% of the industries to non-polluting fuels, launching the progressive EV policy, and tree transplantation policy, etc. This year, we have converted stubble (Paraali) into manure using a bio-decomposing technique, and we have received satisfactory results until now. If this experiment is successful, we will be able to reduce smoke due to stubble burning by next year. We have sprayed the solution on the farmlands in Delhi and we hope that other governments will adopt the technique." Red Light On, Gaadi Off Campaign: Delhi CM Arvind Kejriwal Launches New Initiative to Tackle Air Pollution, Here Are Details.

"Today, we are launching the 'Green Delhi' App. Our aim is to enable every citizen to participate in our 'Yuddh, Pradushan Ke Viruddh' campaign. No movement can happen until people take part in the movement. We are launching the 'Green Delhi' app that can be downloaded from the play store, it is available on android for now and will be available on other platforms soon," he added.

"In this app, a citizen can take a photo or shoot a video and audio of local pollutants, such as garbage burning, industrial pollution, construction dust, etc and upload them on the app to report it. "While reporting the activity, we will automatically get your location where the source of pollution was found," said the CM.

"Please make us aware of any difficulties that you may face in the app initially, and we will work towards resolving them. Our aim is to involve every agency and department, be it DDA, MCD, Delhi government, to strengthen our 'Yuddh, Pradushan Ke Viruddh'," added the CM.

How to Use the 'Green Delhi' App

Register through your mobile number, fill in the required OTP, and register by filling in your name.

Select the language you want to proceed in at the top right corner of the Home Page.

Select the 'Register Complaint' option on the app. The app will detect your location through Google Maps.

Select the type of complaint, department, fill in your address details, district.

You may choose to register your complaint by uploading an audio, photo, and video of the pollutant on the app (optional). You may also add more information about the complaint in the comments section below.

Click on the Submit button to lodge your complaint.