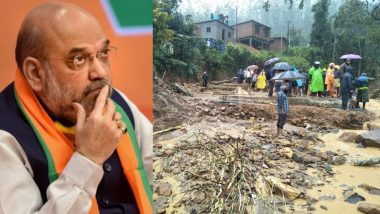 New Delhi/Idukki, August 7: Union Home Minister Amit Shah on Friday expressed his condolences to the bereaved families of 14 people who died due to the landslide in Kerala's Idukki district. He stated that he has spoken with the Director-General of the National Disaster Response Force and assured him of all possible assistance.

Expressing his condolences, Union Home Minister took to Twitter and wrote, "Condolences to the bereaved families of those who have lost their lives in Rajamalai, Idukki(Kerala) due to landslide. Have spoken to DG NDRF, their team has reached the spot to provide all possible assistance to the administration with the rescue work. May injured recover soon." Idukki Landslide in Kerala: PM Narendra Modi Expresses Grief as 14 People Die in Landslide, Announces Ex-Gratia of Rs 2 Lakh Each Next to Victims' Kin.

Condolences to the bereaved families of those who have lost their lives in Rajamalai, Idukki(Kerala) due to landslide.

Have spoken to DG NDRF, their team has reached the spot to provide all possible assistance to the administration with the rescue work. May injured recover soon.

Earlier, Prime Minister Narendra Modi expressed his grief over the tragic death of 14 people due to the landslide in Pettimudi estate Rajamalai area of Idukki district, which is on the way to Eravikulam National Park. PM Modi also announced an ex-gratia of Rs 2 lakh each from PMNRF to next of kin of those who have lost their lives due to a landslide in Rajamalai, while announced 50,000 each for the injured.

Meanwhile, Kerala Governor Arif Mohammed Khan lauded the dedication of rescue teams at Rajamala. Expressing his condolences, he said, "I am deeply grieved at the loss of lives due to landslide at Pettimudi in Rajamala. My heartfelt condolence to the kin of the deceased. Prayers for recovery of the injured & safety of those missing."

The state government have opened control rooms in local bodies of Ernakulam district for flood relief/rescue operations. These centres will also function as COVID-19 centres. Kerala Chief Minister has contacted the Indian Air Force to provide helicopter services to Rajamala for rescue operations, as heavy rains causing difficulty for the rescue teams to help the affected people.

The Idukki district has been witnessing rains for the last three days, following which and communication links have been affected in the area. The district administration is trying to get the BSNL mobile tower functioning so that communication network can be restored. In the meantime, India Meteorological Department has issued a red alert for Pathanamthitta, Kottayam, Idukki and Wayanad districts till August 11. Also, IMD director K Santosh had said that heavy rainfall will continue for two more days.

(The above story first appeared on LatestLY on Aug 07, 2020 05:52 PM IST. For more news and updates on politics, world, sports, entertainment and lifestyle, log on to our website latestly.com).