Pro-Kannada activists are observing a state-wide shutdown (Karnataka bandh) today in protest against the formation of the Maratha Development Authority by the government. 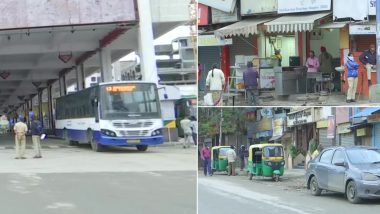 Bengaluru, December 5: Pro-Kannada activists are observing a state-wide shutdown (Karnataka bandh) today in protest against the formation of the Maratha Development Authority by the government. The Karnataka government, headed by Chief Minister BS Yediyurappa, has deployed additional security forces to prevent untoward incidents and ensure law and order is maintained during the 12-hour state bandh. Whoever Has Lived in Karnataka for 10 Years is a Kannadiga: Ashwathnarayan.

BS Yediyurappa on Friday appealed to pro-Kannada activists to call off the shutdown. "We are doing everything to give prominence to Kannada and its culture. No effort is spared to protect and promote the language across the state," Yediyurappa told reporters. Here are services that are open and shut in Karnataka amid the state-wide bandh. Karnataka to Act Tough on Marriages Involving Religious Conversion, Says C T Ravi.

The Karnataka government set up Maratha Development Authority on November 16 with Rs 50 crore corpus for the financial, social, educational and development of the Marathas living in the state over the decades. The Maratha community has been urging the state government to include Marathas under the list of backward classes so that they can get reservation in jobs and seats in educational colleges.

"Though our forefathers were from Maharashtra, we migrated to the erstwhile Mysore state to wage a war in favour of Kannadigas against the British," Sakala Maratha Samaj President Keshavanathrao Jadav told IANS. More than 100 history-sheeters have been detained in view of the Karnataka bandh.

(The above story first appeared on LatestLY on Dec 05, 2020 08:33 AM IST. For more news and updates on politics, world, sports, entertainment and lifestyle, log on to our website latestly.com).