Manni Virdi’s New Bollywood Pop Song “Gabru” Set to Hit Charts This Summer. Be Ready to Dance to the Beat 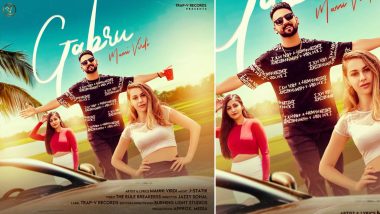 This article is about aspiring Punjabi Canadian Artist Manni Virdi. Manni Virdi is born and brought up in Amritsar, Punjab, and moved to Vancouver 6 years ago where he started his music career. Since Childhood, his interest in music inspired him to make it a career shot.

Tipsy Eyes was his debut song released by Zee Music which turned out to be Superhit debut song. Music was done by Money Aujla, who worked with Yo Yo Honey Singh and was part of Mafia Mandeer. The video was Done by renowned Punjabi/Bollywood video director Jcee Dhanoa.

Since then Manni Virdi has released Hits songs like Alaan-ft TBM, Challi Jaande-ft Dope Peppz, and Iraade-ft Xtatic Music. Apart from Singing, Manni writes songs and composes it as well. According to him, " One Good song is enough to bring back 1000 memories". Manni gave a full dedication to his Singing passion and started his Record Label, Trap-V Records, which itself is a big achievement in 3 years music Career.

Manni Virdi is Coming back with a new Indian Pop song, Gabru-ft J-Statik releasing on August 1, 2020. This song has a reggae vibe which will make you dance to the beat. Manni Virdi gets inspiration from artists like Bob Marley, Wiz Khalifa, Snoop Dogg, Maluma, Tyga, and some Indian artists like Bohemia, Guru Randhawa, Arijit Singh, yo-yo Honey Singh, Badshah, Emiway and Punjabi artists Babbu Mann, Amrinder Gill, etc. Manni has released songs in different genres like reggae, pop, blues which makes him a diversified artist of the new era.

Give a shoutout to the artist on his Instagram/Facebook page: @meetvirdee, @Manni Virdi. Do not forget to subscribe to Trap-V Records and throw your valuable feedback on the songs.