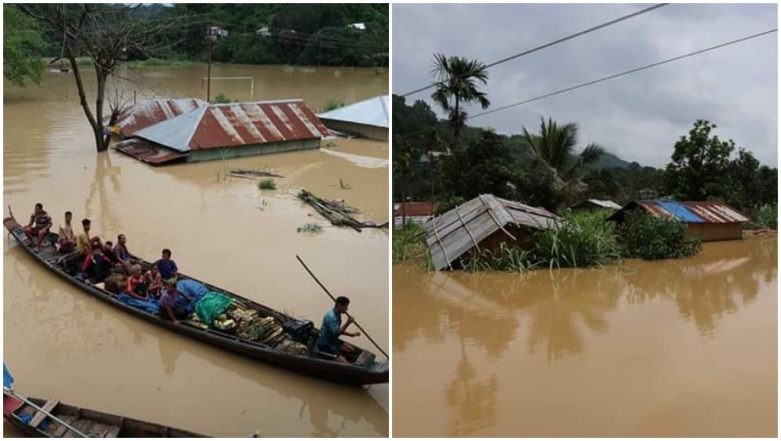 Aizawl, July 13: Around 300 houses have been vacated in several areas of Mizoram after heavy rainfall lashed the northeastern state in the last few days. According to a tweet by ANI, people have been evacuated to safer places  after Tlabung town was flooded due to heavy rainfall in the region. According to a report by Hindustan Times, two men drowned and nearly 390 houses submerged in floods due to incessant rain across Mizoram. Due to  heavy rainfall, schools in the vicinity have been shut as a precautionary measure.  Uttar Pradesh Rains: 15 Dead, 133 Buildings Collapse in 3 Days.

Mizoram: Around 300 houses have been vacated in the area after Tlabung town was flooded due to heavy rainfall in the region. (12.7.19) pic.twitter.com/XsHwmWv3bz

In Assam, trains services to Barak Valley and Tripura were hit due to incessant rains. Over 8.5 lakh people in Assam continued to reel under floods on Friday.  In the last 24 hours, six people have lost their lives in floods and 21 districts  have been affected due to heavy rainfall. The districts that have been impacted by the heavy downpour include- Dhemaji, Lakhimpur, Biswanath, Sonitpur, Darning, Baksa, Barpeta, Nalbari, Chirang, Bongaigaon, Kokrajhar, Goalpara, Morigaon, Hojai, Nagaon, Golaghat, Majuli,Jorhat,Sivsagar,Dibrugarh, Tinsukia.