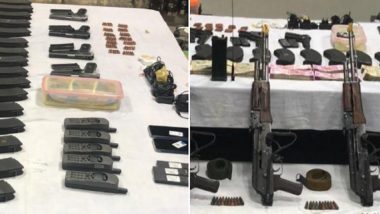 New Delhi, September 25: The preliminary investigation into the massive arms seizure in Punjab from a Khalistan Zindabad Force (KZF)-linked module has revealed its links to Pakistan's Inter-State Intelligence (ISI). The official spy group of Islamabad allegedly facilitated the aerial dropping of 80 kg of weapons in Amritsar and Tarn Taran districts between September 9-16. The arms and ammunitions, said an official privy to the probe, were to be dispatched in Jammu & Kashmir for fueling insurgency. Punjab CM Captain Amarinder Singh Red Flags Pakistan's 'Attempt to Drop Weapons Using Drones' in Indian Territory, Asks Amit Shah to Act.

The Punjab Police had, on September 22, busted the KZF-linked terror module and arrested five radicalised youths. Preliminary probe had revealed that the group was planning to carry out a spree of terror attacks in the state to revive the armed movement for a seperate Khalistan. However, a subsequent investigation into the case pointed out that the ammunition were allegedly intended to be sent to Jammu & Kashmir, an officer was reported as saying on the condition of anonymity.

The high-level investigation is being carried out jointly by four agencies - the Punjab Police, central security agencies, the Border Security Force, the Indian Air Force. The findings so far has revealed that Chinese commercial drones were used by Pakistan to airdrop the weapons.

The arms and ammunitions were sent in eight consignments, the probe has revealed, with most of the airdrops being carried out in Tarn Taran district.

The drones, the probe has revealed, were launched from 2 km inside the Pakistan border. After flying at a height of 2,000 feet, the drones descended upto 1,200 feet in the Indian airspace and flung the weapons towards the catchment areas.

Punjab Chief Minister Captain Amarinder Singh had on Tuesday called upon Union Home Minister Amit Shah to keenly monitor the developments as they reveal a "sinister Pakistani plot" to destabilise both Kashmir and Punjab.

"Recent incidents of Pakistan-origin drones dropping consignments of arms and ammunition is a new and serious dimension on Pakistan's sinister designs in aftermath of the abrogation of Article 370. Request Amit Shah ji to ensure that this drone problem is handled at the earliest," he said.

(The above story first appeared on LatestLY on Sep 25, 2019 08:52 AM IST. For more news and updates on politics, world, sports, entertainment and lifestyle, log on to our website latestly.com).