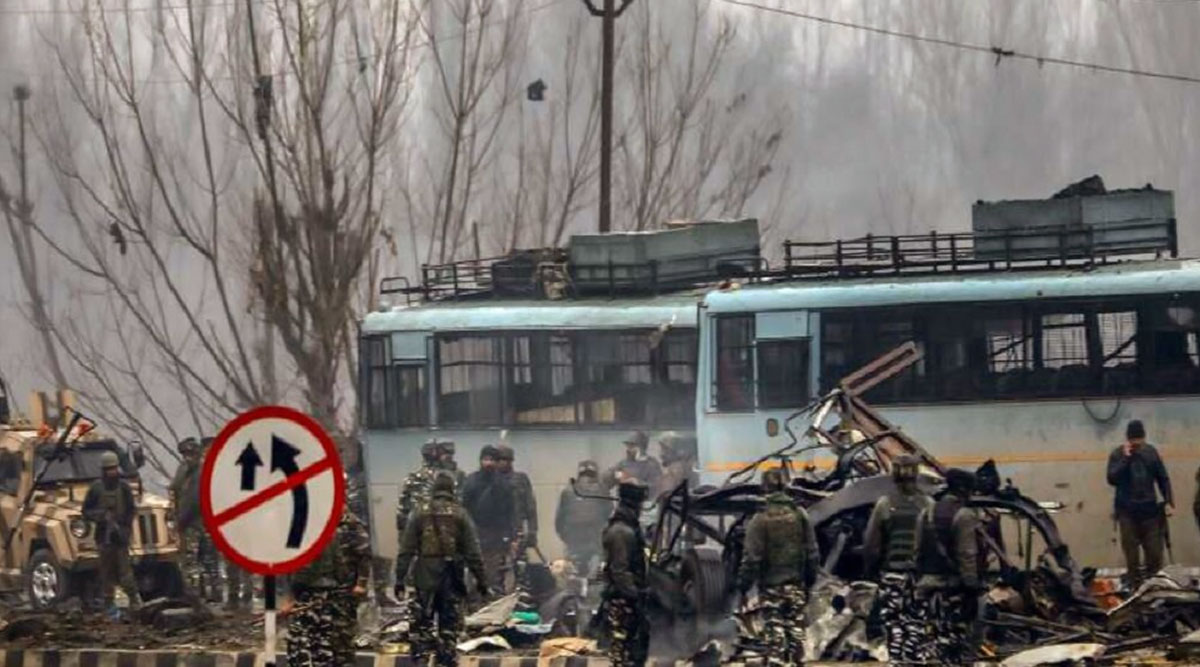 Srinagar, February 28: In a major breakthrough in the Pulwama attack case, the National Investigation Agency (NIA) on Friday arrested an over-ground worker of the Jaish-e-Mohammed (JeM). The man arrested by the NIA has been identified as Shakir Bashir Magrey. He is also one of the accused in the case. According to reports, Magrey had provided shelter and other logistical assistance to the suicide-bomber Adil Ahmad Dar, who rammed his vehicle into the convoy of Central Reserve Police Force (CRPF) on February 14, 2019. 'Yousuf Chopan Was Never Arrested in Pulwama Attack Case, Got Bail in Case Related to JeM Conspiracy', Clarifies NIA.

During the investigation, the accused revealed he had harboured Dar and Pakistani terrorist Mohd Umar Farooq in his house from late 2018 till February 14, the day when the attack was carried out. Magrey had also assisted both the terrorists in the preparation of the IED. The JeM ground-worker was remanded to 15 days of NIA custody for detailed interrogation.

The 22-year-old Magrey is a resident of Hajibal, Kakapora in Pulwama district of Jammu and Kashmir. During his initial interrogation, he disclosed that on several occasions, he collected and delivered arms, ammunition, cash and explosive material to the JeM terrorists, including those involved in Pulwama attack. Pulwama Terror Attack: India Remembers Its Brave Men; Here's The List of CRPF Jawans Who Were Martyred in February 14, 2019, JeM Strike.

NIA: He has revealed that he had harboured Adil Ahmad Dar & Pakistani terrorist Mohd Umar Farooq in his house from late 2018 till the attack in Feb 2019, and assisted them in the preparation of the IED. He has been remanded to 15 days of NIA custody for detailed interrogation. https://t.co/zO4sKpBMpQ

He was also involved in modifying the Maruti Eeco car, which was rammed into the CRPF convoy, and fitting the IED in it in early February, 2019. Magrey’s shop is located at near Lethpora bridge, and he was asked by Umar to conduct reconnaissance of the movement of CRPF convoys on Jammu-Srinagar Highway in January 2019.

The NIA in a statement said, “During the investigation, the make, model and number of the car used in the attack was quickly ascertained by NIA to be a Maruti Eeco car through forensic examination of the tiny remnants of the car, which were seized from the spot during extended searches.” The investigative agency further added, “This has been corroborated by accused Shakir Bashir Magrey. The explosives used in the attack were determined to be ammonium nitrate, nitro-glycerin and RDX through forensic investigation.”

In the attack, which took place on February 14, 40 CRPF jawans lost their lives. Days after the attack, the Indian Air Force (IAF) conducted airstrikes on JeM training camps in Pakistan’s Balakot.