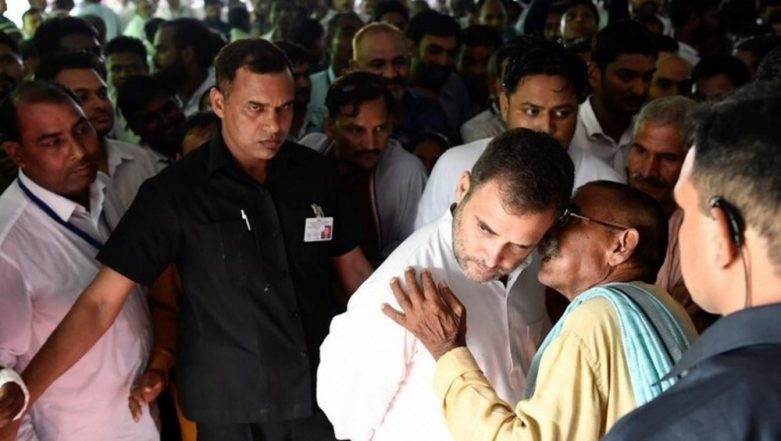 Amethi, July 10: Indian National Congress leader Rahul Gandhi on Wednesday, July 10, visited Uttar Pradesh's Amethi for first time after losing the Lok Sabha seat to Bharatiya Janata Party (BJP) leader Smriti Irani in 2019 general election. The visit comes on the day when Gandhi scion achieved a milestone of 10 million followers on Twitter and said he "will celebrate the milestone in Amethi" with party workers and supporters.

Rahul Gandhi with workers of Congress party, in Amethi. This is his first visit to the constituency, post the loss in Lok Sabha elections 2019. pic.twitter.com/SUExmbhNly

Gandhi 's visit is a kind of fact-finding for his defeat in the Lok Sabha elections to Smriti Irani, who has been visiting the constituency frequently for the past five years. The reason for the loss is reportedly said to be disconnection with the ground level workers. The ground-level workers were complaining that leaders close to Gandhi didn't allow them to meet him.

Before 2019 polls, Sanjay Gandhi, Rahul's uncle and BJP leader Varun Gandhi's father, was the only Gandhi to lose an election from Amethi. Later, former Prime Minister Rajiv Gandhi contested and won Amethi parliamentary seat in 1980. Rahul Gandhi came to Congress stronghold in 2014 and represented it in parliament for three consecutive terms.