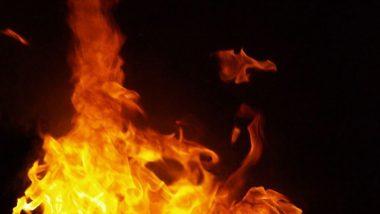 Tirupattur, July 13: A 27-year-old man from set himself ablaze in Ambur town of Tamil Nadu’s Tirupattur district after police seized his two-wheeler for violating lockdown on Sunday. The man identified as Mugilan, a resident of Anna Nagar in Ambur, had gone out during a weekend lockdown when cops stopped him. 4,244 Fresh COVID Cases, 68 Deaths Reported in Tamil Nadu.

According to reports, Mugilan went out on the national highway during the shutdown to contain the spread of coronavirus. He did not reportedly give a satisfactory answer as to why he was outside during the lockdown. Later, police seized his vehicle. 5 Tamil Nadu Districts Including Chennai, Madurai Under 'Complete Lockdown' on Sunday, Few Essential Services Exempted.

After some time, Mugilan returned with a can of kerosene and set himself ablaze. Police personnel present at the sport rushed him to the Ambur government hospital. He was later shifted to Christian Medical College, Vellore. According to a report published in The News Minute, five officers involved in the incident have been booked, and an investigation is underway.

“We have withdrawn the services of the five policemen who were on duty at that time from Ambur town police station, and they have been shifted to Tirupattur town police station so as to ensure free and fair inquiry into the issue.,” reported the media house quoting Tirupattur SP Vijayakumar as saying. Police also scanned the CCTV footage from a location where the incident took place.

(The above story first appeared on LatestLY on Jul 13, 2020 12:55 PM IST. For more news and updates on politics, world, sports, entertainment and lifestyle, log on to our website latestly.com).