The IMD said that fairly widespread/Widespread light/moderate rainfall with isolated heavy falls and thunderstorm/lightning is very likely over Himachal Pradesh on August 18 and Uttarakhand from August 18-20. 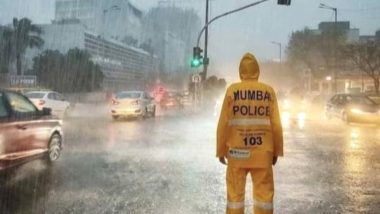 As per the IMD forecast, fairly widespread/Widespread light/moderate rainfall with isolated heavy falls and thunderstorm/lightning is very likely over Madhya Pradesh, Vidarbha, ghat areas of Madhya Maharashtra, Konkan, and Goa on August 16; Rajasthan and Gujarat Region from August 15-17 and Saurashtra & Kutch on August 16 and 17. Besides, isolated very heavy rainfall is very likely over Rajasthan, West Madhya Pradesh, and Gujarat state on August 16.

"Depression over East Madhya Pradesh moved west-northwestwards with a speed of 33 kmph during last 6 hours and lay centered at 0530 hours IST of 16th August over West Madhya Pradesh near latitude 24.6°N & longitude 77.3°E, close to Guna (Madhya Pradesh) and 160 km east-southeast of Kota (Rajasthan). It is very likely to continue to move west-northwestwards and weaken gradually to a well marked low pressure area during next 12 hours," the IMD said in its daily weather bulletin. Weather Forecast: Heavy Rains Likely Across Odisha, Jharkhand And West Bengal This Weekend; Light Rainfall Expected in Delhi.

The weather agency also said that the off-shore trough runs along south Gujarat and Maharashtra coasts at mean sea level. The IMD said that fairly widespread/Widespread light/moderate rainfall with isolated heavy falls and thunderstorm/lightning is very likely over Himachal Pradesh on August 18 and Uttarakhand from August 18-20.

The IMD also stated that there would be no significant change in the maximum temperatures during the next 5 days.

(The above story first appeared on LatestLY on Aug 16, 2022 11:09 AM IST. For more news and updates on politics, world, sports, entertainment and lifestyle, log on to our website latestly.com).