The INLD and the JJP are primarily rural Jat-centric parties with the farmers as their core vote bank. The Jats, a dominant farming community, comprise 28 per cent of the state's population. Twenty five Jat leaders, including four Chautalas, were elected to the state assembly in October 2019. 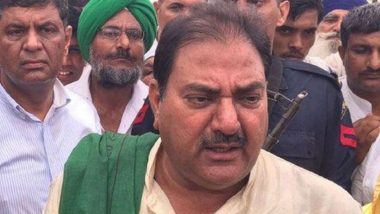 Chandigarh, January 27: The lone legislator of Haryana's Indian National Lok Dal Abhay Singh Chautala on Wednesday resigned from the Assembly over the three new farm laws and registration of cases against farmer leaders for the violence in Delhi on Republic Day.

Chautala reached the assembly here riding a tractor and handed over his resignation to Speaker Gian Chand Gupta, who accepted it. In his resignation, he cited the reason as non-acceptance of the demand of the protesting farmers seeking roll back of all the three farm laws.

"Shri Abhay Singh Chautala, who represents Ellanabad assembly constituency, he came to me personally and tendered his resignation. I believe that the resignation that he has submitted is correct in all technical aspects. I have accepted it. Tractor Rally Violence: BKU Spokesperson Rakesh Tikait Named in FIR by Delhi Police, VM Singh Withdraws From Ongoing Farmers’ Protest.

"He has referred to his earlier two letters that he had sent to me citing union government's refusal to accept farmers' demands," a statement by the Speaker said. Talking to the media, Chautala blamed the BJP for perpetuating violence in Delhi on Republic Day.

Earlier this month, Chautala, the grandson of former Deputy Prime Minister Chaudhary Devi Lal, sent a "conditional" resignation letter to the Speaker, offering to resign from the assembly in Haryana if the Centre failed to repeal the new agricultural laws by January 26.

In his letter, Chautala had said it should be considered a resignation from the Assembly if the Central government failed to repeal the three farm laws by January 26. His party's breakaway faction, the Jannayak Janta Party (JJP), is the crucial coalition partner in the state BJP government led by Manohar Lal Khattar.

JJP leader and Deputy Chief Minister Dushyant Chautala has been maintaining a stoic silence in public over the issue of farmers, who have been staging protests on the border of the national capital, demanding revoking of the agricultural laws, for the past 63 days.

The INLD and the JJP are primarily rural Jat-centric parties with the farmers as their core vote bank. The Jats, a dominant farming community, comprise 28 per cent of the state's population. Twenty five Jat leaders, including four Chautalas, were elected to the state assembly in October 2019.

Coming out openly for the first time with the protesting farmers, JJP national chief and former MP, Ajay Singh Chautala, who is the brother of Abhay, on December 2, 2020, said the Centre should give, in writing, an assurance on the minimum support price (MSP) to the protesting farmers that largely come from Punjab, Haryana and Uttar Pradesh. Who Are Deep Sidhu and Lakha Sidhana? Know About the Two Men Being Blamed by Farmer Leaders for Tractor Rally Violence and Hoisting Flag at Red Fort.

Political observers believe pressure on the JJP within the party to withdraw its support to the state government has been gaining as the BJP Central leadership has been adopting a 'tough posture' on its three agricultural laws.

Besides the JJP's 10 legislators, seven independent MLAs had also extended support to the BJP, helping it reach a tally of 57 seats in the 90-member Assembly.

(The above story first appeared on LatestLY on Jan 27, 2021 05:48 PM IST. For more news and updates on politics, world, sports, entertainment and lifestyle, log on to our website latestly.com).