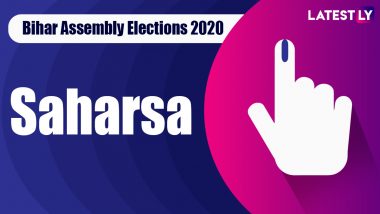 Saharsa Vidhan Sabha seat is situated in the Saharsa district of Bihar. The Saharsa Assembly constituency falls under the Madhepura Lok Sabha seat. About 1,207 candidates contested in the third and final phase of Bihar Assembly Elections 2020. Alok Ranjan of BJP won on this seat with 1,03,538 votes. Out of the total 243 Seats, NDA won absolute majority with 125 seats and Mahagatbandhan got 111 seats. Voting for the Saharsa election took place on November 7 in the third phase of Bihar Assembly Elections 2020. Counting of votes for the Bihar polls took place on November 10.

Voting for first phase of Bihar Assembly Elections 2020 was held on October 28 and second phase was held on November 3. Elections in the state were the first major polls amid COVID-19 pandemic. While most were looking at it as a two-way fight between the NDA, comprising of Nitish Kumar's JD(U) and BJP, and the Mahagathbandhan consisting of Tejashwi Yadav's RJD, Congress and Left, the LJP this time decided to go alone with Chirag Paswan at the helm of affairs in the party. It was also a test for Chief Minister Nitish Kumar.

(The above story first appeared on LatestLY on Nov 12, 2020 02:33 AM IST. For more news and updates on politics, world, sports, entertainment and lifestyle, log on to our website latestly.com).