The National Investigation Agency in the charge sheet against Kashmiri separatist leader Yasin Malik, who was convicted in a terror funding case on Thursday, stated that they have seized a copy of Hizb-ul-Mujahideen's letterhead from his premises. 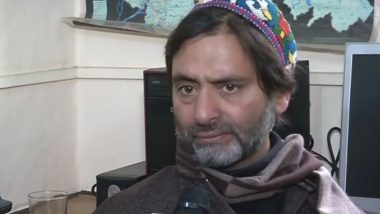 New Delhi, May 19: The National Investigation Agency in the charge sheet against Kashmiri separatist leader Yasin Malik, who was convicted in a terror funding case on Thursday, stated that they have seized a copy of Hizb-ul-Mujahideen's letterhead from his premises.

"In that letterhead, the terrorist organisations -- HM, LeT and JeM -- jointly warned the people, who supported the football tournament in the valley, to disengage themselves from the organisers of this game and to show loyalty to the freedom struggle," the probe agency stated. Yasin Malik Convicted by NIA Court in Terror Funding Case, Sentencing on May 25

"The allegations against Mohammad Yasin Malik is that he is the head of Jammu & Kashmir Liberation Front (JKLF), an organisation involved in terrorist and subversive activities in Jammu and Kashmir. Being a part of the conspiracy related to secessionist and terrorist activities in the State of Jammu and Kashmir, he was arrested on April 10, 2019," the charge sheet said.

It is alleged that various terrorist organisations -- Lashkar-e-Taiba (LeT), Hizb-ul-Mujahiddin (HM), Jammu and Kashmir Liberation Front (JKLF), Jaish-e- Mohammed (JeM), etc. -- with the support of ISI of Pakistan, perpetrated violence in the valley by attacking civilians and security forces. It is further alleged that in the year 1993 All Parties Hurriyat Conference (APHC) was formed to give a political front to the secessionist activities. Yasin Malik Convicted by NIA Court in Terror Funding Case; Watch Video of Kashmiri Separatist Being Brought out of Court

On February 26, 2019, Malik's house was searched and incriminating material including documents and electronic items were seized. His history of being a terrorist and some details of such of his activities are detailed, it read.

It is further submitted that in 1993, JKLF became a part of AHPC. In 2016, accused Yasin Malik along with S.A.S. Geelani and Mirwaiz Umar Farooq formed a self-styled group called Joint Resistance Leadership (JRL) and they started issuing directions to the masses to hold protests, demonstrations, hartaals, shutdowns, roadblocks and other disruptive activities to push the entire society into chaos and lawlessness.

During August 6-16, 2016, the protests were very violent and 89 cases of stone pelting and other unlawful activities were registered in ten days, it stated.

Facebook chat between accused Yasin Malik and Shahid ul Islam, the Spokesman of Hurriyat Conference (M), shows that the stone pelting incidents in Kashmir Valley were orchestrated as a part of well-planned conspiracy hatched by the accused persons, it contended.

(The above story first appeared on LatestLY on May 19, 2022 02:01 PM IST. For more news and updates on politics, world, sports, entertainment and lifestyle, log on to our website latestly.com).