Famous Indian Celebrities’ Birthdays in October: From Amitabh Bachchan to Ananya Panday to Prabhas, You Share Your Birthday Month With These Influential Figures

From Amitabh Bachchan to Amit Shah to Hardik Pandya, many Indian personalities celebrate their birthdays in October month. So, let’s take a look at some of the influential celebrities who were born in October. 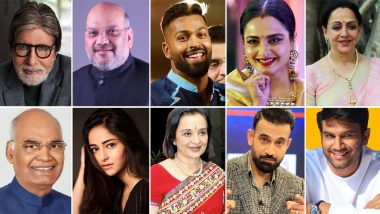 October is almost here! It’s the month of all the well-balanced people who manage to uphold harmony and peace in their everyday lives. Yes, they are no other than Librans! However, those born in the last week of October are Scorpios who are intense in everything they do. So, do you fit in any of these categories? Well, some of your favourite celebrities certainly do! From Amitabh Bachchan to Amit Shah to Hardik Pandya, many Indian personalities celebrate their birthdays in October month. So, let’s take a look at some of the influential celebrities who were born in October. Be it a movie star, sportsperson, or even a politician; these people share some fascinating traits due to their identical birth month.

Known for their optimistic personality and unique sense of doing things, October-borns are some of the kind-hearted people who’d keep the surroundings calm and composed. So, the next time you meet a person born in October, stay relaxed and let them spread the positive vibe that they possess since birth. But before that, know about the famous Indian stars who were also born in this beautiful month. Some of them are Asha Parekh, Rekha, Hema Malini, Zaheer Khan, Gautam Gambhir, Ram Nath Kovind and Navjot Singh Sidhu, among others. So, without any further ado, run through the list of Indian celebrities’ birthdays in October. Look at the list of people who will turn a year older this October! October 2022 Holidays Calendar With Major Festivals & Events: List of Important Dates and Indian Bank Holidays for the Tenth Month.

October 1 - Ram Nath Kovind, former President of India, served from 2017 to 2022. The Indian politician will turn 76 this year.

October 2 - Asha Parekh, the retired Indian actress, is known to be one of the highest-paid actresses of the 1960s and 1970s.

October 4 - Rishabh Pant, the middle-order wicket-keeper batsman and Indian cricketer, serves as the captain of the IPL team, Delhi Capitals.

October 7 - Sharad Kelkar is an Indian actor and voice artist who also starred in several Marathi movies and television serials.

October 10 - Rekha is believed to be one of the finest Indian actresses whose charismatic personality and classic style inspire many.

October 10 - Rakul Preet Singh is an Indian actress who has worked in Telugu, Tamil and Hindi cinema.

October 11 - Amitabh Bachchan needs no introduction! His exquisite charm and outstanding acting made him one of the most influential actors to date.

October 11 - Ronit Roy has created a strong foothold in Indian television as well as in the cinemas.

October 11 - Hardik Pandya, the Indian cricketer, is an all-rounder who recently led his IPL team, Gujarat Lions, to claim their maiden title in the 2022 edition.

October 14 - Gautam Gambhir, the former cricketer, is the only Indian batsman to score more than 300 runs in four consecutive Test matches

October 16 - Hema Malini, also called the ‘Dream Girl’, featured in various Hindi films and is still known to be one of the most successful actresses of her time.

October 19 - Sunny Deol, the action hero of Indian cinema, will turn 64 this October

October 20 - Virender Sehwag, the cricket personality, represented the country from 1999 to 2013.

October 22 - Amit Shah is the Minister of Home Affairs and the first Minister of Co-operation of India.

October 23 - Prabhas is an Indian actor who works dominantly in Telugu cinema. His role in Bahubali in S.S. Rajmaouli’s epic has earned him worldwide fame.

October 26 - Raveena Tandon is the Indian actress known for her roles in Dilwale and Ziddi.

October 27 - Irfan Pathan is the former Indian cricketer who is now a commentator and a cricket analyst.

October 28 - Aditi Rao Hydari, the Indian actress, is famous for her minor roles in Rockstar and Padmavat.

October 30 - Abhijeet Bhattacharya, the Bollywood playback singer, has been one of the favourite artists of all time.

October 30 - Ananya Panday, the young actress, made her debut in Bollywood in 2019 through Student of the Year 2.

So, these are some of the October-born personalities who are famous in their own fields. They continue to inspire many as their unique talents, and exceptional skills make them stand out in their respective genres. We wish a very happy birthday to all these stars looking forward to having a blast in their October birth month!

(The above story first appeared on LatestLY on Sep 29, 2022 03:07 PM IST. For more news and updates on politics, world, sports, entertainment and lifestyle, log on to our website latestly.com).