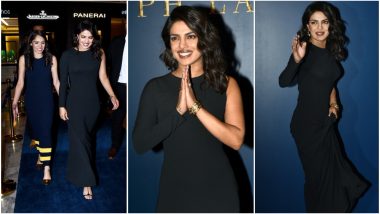 Actress Priyanka Chopra is in Delhi currently and we already saw her at the celebrations of her brother Siddharth Chopra's Roka ceremony. Apart from that, Priyanka also managed to attend the store launch of one of her favorite designer, Ralph Lauren. Priyanka was seen in a gorgeous black gown as she attended the launch. It is no surprise that Priyanka was there at the store launch considering how close she is to the designer. We completely loved this all-black look of PC. Going minimal and the actress ditched anything glitzy which worked perfectly for the event.

Ralph Lauren has been an integral part in Priyanka's Hollywood success and also played cupid to Priyanka and her husband Nick Jonas' love story accidentally. Back in 2016, Priyanka Chopra attended the MET gala wearing Ralph Lauren's dress and so did Nick Jonas. It was during this event that sparks flew between the two. Priyanka Chopra Shares Pictures From Brother Siddharth Chopra and Ishita Kumar's Roka Ceremony - See Pics!

Watch the video of Priyanka Chopra's arrival at the store launch:

Not only this but Ralph Lauren also designed Priyanka Chopra's wedding gown. It was a special honour considering the designer has previously designed wedding gowns only for his family members. Isn’t It Romantic? Priyanka Chopra Calls Nick Jonas ‘Best Travel Buddy’ as They Reach India – See Pic.

Also spotted at the Delhi store launch of Ralph Lauren was Ranbir Kapoor's sister Riddhima Kapoor. Priyanka arrived in India along with husband Nick Jonas a couple of days ago. We are expecting her to be a part of Akash Ambani's wedding festivities soon too!

(The above story first appeared on LatestLY on Feb 27, 2019 11:53 PM IST. For more news and updates on politics, world, sports, entertainment and lifestyle, log on to our website latestly.com).