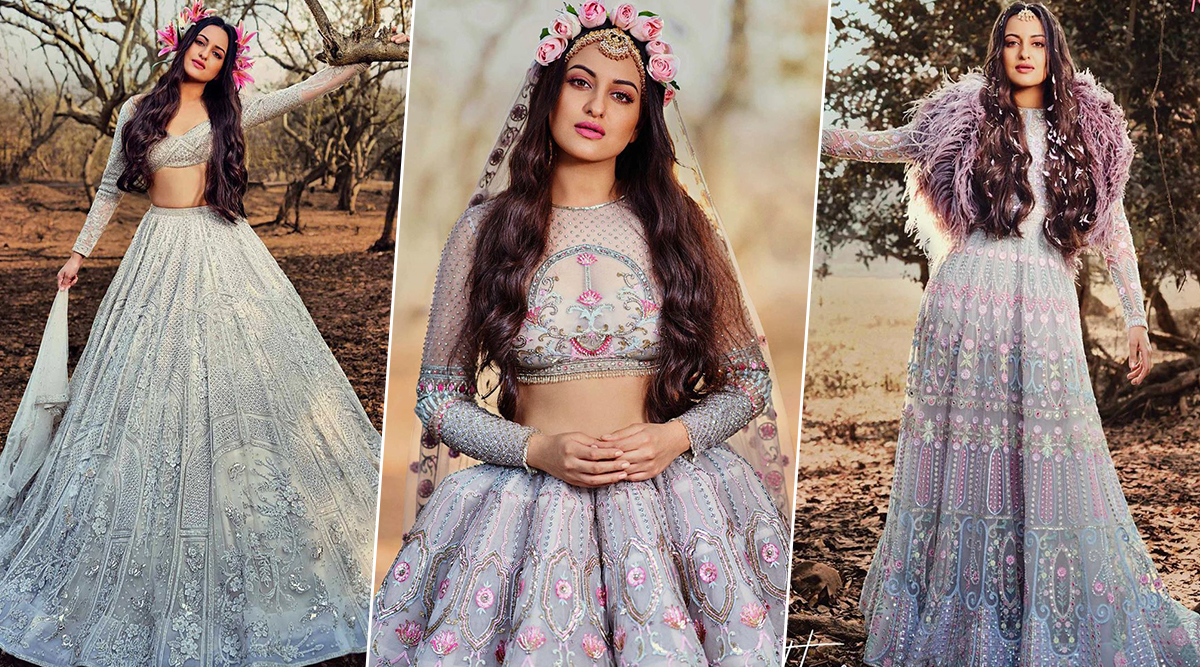 Sonakshi Sinha turns into a muse for designer duo Falguni & Shane Peacock's own magazine. The February cover star goes all traditional in the new issue that revolves around the modern-day brides. Gones are those when a traditional red outfit would be a necessity for all brides-to-be. Nowadays, it's more about having fun and playing with different colour palettes instead of restricting to any one colour. The Dabangg girl is a show-stealer and this one's probably one of her best photoshoots so far. Keep Calm, Ride On! Dabangg Girl Sonakshi Sinha Ditches Her Four-Wheeler And Hops On A Royal Enfield To Meet Kareena Kapoor Khan (View Pics).

Dressed in typical Falguni & Shane Peacock silhouettes, Sonakshi is exuding all glamour and glitz. Seeking inspiration from Frida Kahlo, her hairdo perfectly complements the theme and her different attires that are simply drop-dead gorgeous. We are certainly digging her mystical look and the way she's pulling off those heavily embellished outfits with chutzpah is admirable. It's the third time for Sonakshi to star as the cover girl for Peacock magazine and hopefully, it won't be the last time. Pretty and Pastel! Sonakshi Sinha Looks Resplendent in her Anamika Khanna Outfit (View Pics).

Sonakshi's last release was Salman Khan's Dabangg 3 that hit the screens in December 2019. Post which the actress will be next seen in Bhuj: The Pride of India that releases on Independence Day 2020. There are also reports about her making her web debut with Tumbadd actor, Sohum Shah and we are looking forward to its announcement.