Attukal Pongala 2021 Date, History and Significance: How to Celebrate Attukal Pongala? All You Need to Know About the Auspicious Festival Dedicated to Attukal Devi 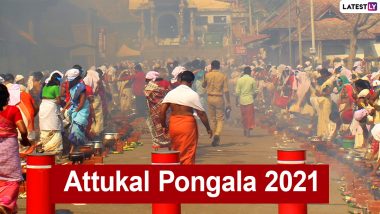 How is Attukal Pongala Celebrated?

Every year, women from across the world visit the Attukal temple in Thiruvananthapuram during the time of this festival. However, this year, the Kerala government has decided to scale down the event and keep the celebrations low-key as we continue to battle the pandemic. The government is urging people to follow the given guidelines and celebrate pongala from home.

Women often dress up in colourful attire, prepare delicious delicacies for Attukal Devi and come to the temple to present their offerings. We hope that this Attukal Pongala celebration brings with it peace and happiness to all. Happy Attukal Pongala 2021!

(The above story first appeared on LatestLY on Feb 26, 2021 06:22 PM IST. For more news and updates on politics, world, sports, entertainment and lifestyle, log on to our website latestly.com).