Bengali Lokkhi Pujo and Diwali Lakshmi Puja, How Are the Two Festivals Different? Rituals, Significance and Traditions You Should Know 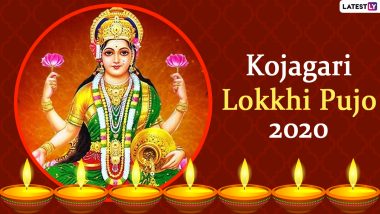 After the massive celebration of Durga Puja, Bengalis gear to welcome, Goddess Laxmi, who is also Maa Durga’s daughter, according to Hindu mythology. Kojagari Lakshmi Puja is one of the most significant festivals celebrated in the eastern part of India, across West Bengal, Assam and Orissa. The pujo falls on the full moon day in the lunar month of Ashwin. Kojagari Lokkhi Pujo 2020 is on October 30, and the rituals are quite different than the Laxmi Puja that Hindus observe during the festival of Diwali. So, how is Lokkhi Pujo different than Laxmi Puja being observed during Diwali? In this article, we will talk in details about the rituals, significance and traditions that make Kojagari Lokkhi Pujo different than Lakshmi Puja in Diwali.

Kojagari Lokkhi Pujo is one of the famous observation among the Bengali community. It is believed that on the day of Kojagari Lakshmi Puja, Goddess Lakshmi takes a round on the Earth’s orbit and relieves her devotees from their woes. The festival is famously known as Sharad Purnima in other parts of India. While Eastern India worships Goddess Lakshmi on this day, most people from other parts worship her on Amavasya tithi that falls during Diwali.

In addition to the tithi and auspicious timing, the rituals for Lokkhi Pujo is also different. Goddess Lakshmi is also called the Goddess of wealth and although the significance to worship the Goddess remain the same during both the festivity, rituals are said to be different during Kojagari Lakshmi Pujo. Bongs wake up before the sun rises to place the idol of Laxmi on her ‘asan.’ The house is cleaned, and devotees make beautiful alpona of different designs and the Goddess’ feet around the house. Different bhogs and sweets are prepared to offer the Goddess.

On the other hand, during Diwali, not only goddess Lakshmi, but Lord Ganesha is also worshipped. The win over good over evil is said to bring prosperity, this is why on Diwali, Goddess Lakshmi is worshipped and Ganesha is believed to be worshipped to restore the balance between material gains and intelligence.

(The above story first appeared on LatestLY on Oct 29, 2020 11:54 AM IST. For more news and updates on politics, world, sports, entertainment and lifestyle, log on to our website latestly.com).