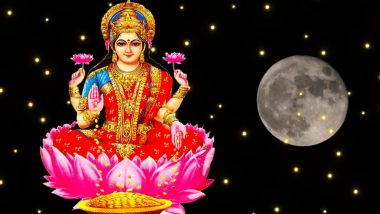 After the nine-day Navaratri celebrations at the start of October, the second half of the month has more and more festivals coming up. A lot of these days have to do with the phases of the moon. The Kojagiri Puja also known Kojagara Puja and Kojagiri Lakshmi Puja will be celebrated in eastern parts of India on October 23-24, 2018. According to the Hindu Lunisolar Calendar, Kojagiri Puja 2018 date or Kojagiri Purnima is same as that of Sharad Purnima, which will be celebrated widely in the rest of the country. On this day people do Lakshmi Puja (worshipping Goddess Lakshmi, the Goddess of wealth and prosperity) on Purnima tithi. It is called the Kojagiri Lakshmi Puja, more commonly known as Bengali Lakshmi Puja as the festival is celebrated with much enthusiasm in West Bengal. Let us look at Kojagara moon timings on Sharad Purnima, its significance and celebrations. Sharad Purnima 2018 Date: Know the Importance of Having Amrit Kheer, History & Auspicious Tithi Timings.

How Kojagari Lakshmi Puja Got The Name?

The word ‘kojagari’ or ‘kojagiri’ is derived from the expression “ko jagorti?” meaning “Who is awake?” According to Hindu legends, when Devi Lakshmi descended on the earth on the full moon day of the Ashvin month. The Goddess of Wealth is believed to have walked around asking this and those who answered her sought the divine blessings. At some place, during Kojagari Lakshmi Puja or Kojagiri Purnima, devotees stay awake all night in order to respond to Goddess Lakshmi and seek her blessings.

We all know about praying to Goddess Lakshmi on Amavasya Tithi during Diwali. It is one of the biggest Hindu festivals. However, in the eastern Indian states of West Bengal, Odisha and Assam, people pray to Goddess Lakshmi on the full moon day in the lunar month Ashwin. This is called Kojagari Lakshmi Puja or Bengali Lakshmi Puja and is commonly known as Sharad Purnima.

As per mythology, Kojagiri Purnima or Kuanr Purnima is believed to be the birthday of the goddess Lakshmi. It is a harvest festival, which signifies the end of the monsoon season. Brahma Purana, Skanda Purana, and the Linga Purana have mentioned about this auspicious night. It describes about Goddess Lakshmi being present on the earth and blesses her true devotee. It is also believed moon and earth to be closer to each other. Sharad Purnima 2018 Wishes & Kojagiri Purnima Moon HD Images: Best WhatsApp Messages in Hindi and GIF Photos to Wish Happy Sharad Poornima.

Goddess Lakshmi is the primary deity during Kojagari Lakshmi Puja. Devotees especially women in West Bengal observe fast on Kojagiri Purnima. They prepare bhog for Maa Lakshmi, usually kheer (rice pudding). Houses are decorated with traditional ‘alpana’ (Rangoli) as well as draw footprints of Lakshmi as a part of puja ceremony. In Odisha, unmarried girls keep fast and pray to Lord Kartikeya for desired partners. It is celebrated as Kumar Utsav in Odisha. An important part of Kojagari Lakshmi Puja across states is the all-night vigil prayer with devotees believing the age-old legend of Goddess Lakshmi paying a visit to her devotees.

(The above story first appeared on LatestLY on Oct 24, 2018 09:08 AM IST. For more news and updates on politics, world, sports, entertainment and lifestyle, log on to our website latestly.com).