Navratri 2020 Katyayani Puja: Know The Colour and Goddess of Day 6 to Worship The Sixth Avatar of Maa Durga This Sharad Navaratri

Navratri, the 9-day Hindu festival has begun and varying festivities are underway. Navratri 2020 began on Oct 17 and will end on Oct 25. The occasion is celebrated by following different traditions and ritualistic practices. October 22 marks the sixth day of the festival when devotees worship Devi Katyayani, the sixth form of Goddess Durga. 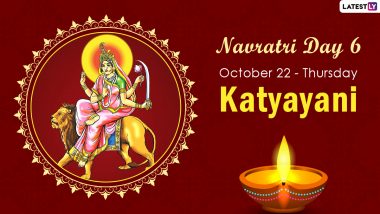 Navratri, the nine-day Hindu festival has begun and varying festivities are underway. Navratri 2020 began on October 17 and will end on October 25. The occasion is celebrated by following different traditions and ritualistic practices. October 22 marks the sixth day of the festival when devotees worship Devi Katyayani, the sixth form of Goddess Durga. Nine days of the festival is associated with nine colours and devotees dress as per the hue on the occasion. Navratri 2020 day 6 colour is yellow. Devi Katyayani Puja 2020 is held on October 22. Devotees worship her by singing hymns and praises. Sharad Navratri 2020 Wishes & Images in Full HD: WhatsApp Stickers, GIF Greetings, SMS, Quotes, Facebook Photos, Messages to Send During Navaratri.

Devi Katyayani, Lord Krishna's sister is considered as one of the most violent forms of Goddess Parvati. She is the daughter of Sage Katyayan and is regarded as a fierce form of Goddess Durga which also includes Bhadrakali and Chandika. As she is associated with the colour red, the idol of the Goddess is adorned in red colour on the sixth day of Navratri. Devi Katyayani is believed to be a warrior goddess with four arms; she carries a sword and rides on a lion. She represents Shakti or power. Devotees offer her honey and roses. Easy Mehendi & Alta Designs for Navratri and Durga Puja 2020: Quick Mehndi & Bengali Aalta Patterns You Can Try at Home to Celebrate the Maa Durga Festival.

She is associated with the colour red, a representation of power which is also mentioned in Patanjali's Mahabhashya on Panini, written in second century BC. She is first mentioned in the Taittiriya Aranyaka part of the Yajurveda. As per Hindu traditions like Yoga and Tantra, she is ascribed to the sixth Ajna Chakra or the Third eye chakra. One can attain her blessings by concentrating on this point. Sharad Navratri 2020 Bhakti Geet by Anuradha Paudwal: From Durga Bhajan to Ambe Tu Hai Jagdambe Kali, Listen to These Devotional Songs & Aarti to Celebrate Navdurga Festival.

On the sixth day of Navaratri, devotees pray to the powerful form of Durga, Devi Katyayani. She blesses the devotees who meditate and prays to her.

Devi Katyayani is named so as she is the daughter of Sage Katyayan. According to Hindu religious texts, Goddess Parvati was born at the house of sage Katya and due to which this form of Goddess Parvati is known as Katyayani. Devi Katyayani is also mentioned in Buddhist, Jain and several Tantric texts, especially the Kalika-Purana written in the 10th century.

(The above story first appeared on LatestLY on Oct 22, 2020 08:32 AM IST. For more news and updates on politics, world, sports, entertainment and lifestyle, log on to our website latestly.com).