World Social Media Day 2020: Date, History And Significance of The Day That Celebrates The New Era of Communication 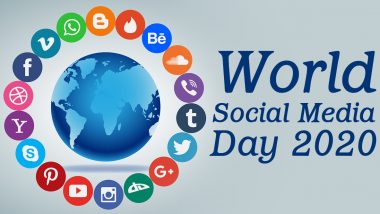 There was an era of telephone, then the fax machine, and then the social media that remodelled the way of communicating. Since its creation, it has changed the way how people connect with each other. With the use of social media, family and friends can meet-up at any moment. It has also changed the way how marketers reach consumers. Because of its huge impact in our lives, World Social Media Day is observed on June 30. World Social Media Day 2020 falls on Tuesday.

Social media day was launched by digital media website Mashable on June 30, 2010. Since the day was founded, its popularity has been growing every year. People use #SMDay and #socialmediaday hashtag to get involved in the celebrations.

The first major social media platform was Friendster which was launched in 2002 and then came MySpace in 2003. The launch of Facebook in 2004 transformed our lives and now over one billion people are using it. Currently, the most common social media platforms are WhatsApp, Twitter, Instagram, Youtube and many others.

World Social Media 2020 can be observed by using hashtags such as #SMDay and #SocialMediaDay. Netizens can also upload a photo or update status on social media. You certainly won't be alone to do it as important events spread like wildfire on social media.

(The above story first appeared on LatestLY on Jun 29, 2020 09:04 PM IST. For more news and updates on politics, world, sports, entertainment and lifestyle, log on to our website latestly.com).