World Vegan Day 2020 Date And Theme: Know the Significance And History of the Observance That Promotes Veganism 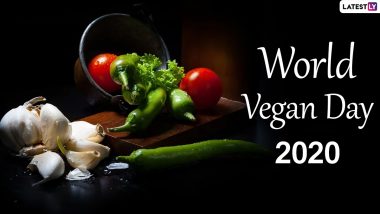 World Vegan Day 2020 Details: World Vegan Day is an annual festival which is observed by vegans across the globe. But how do you differentiate between vegans and vegetarians? Well, people who do not consume meat, eggs, etc. are vegetarians. However, people who are vegetarians and also do not consume dairy products such as milk, cheese, paneer etc. are called vegans. World Vegan Day is celebrated amidst grandeur festivities and socio-cultural events around the world. If you are searching for more information about World Vegan Day 2020 – its date, history, theme, and significance, then look no further, as we at LatestLY, have it all covered for you. Vegan Protein: From Quinoa to Seitan, Here Are 5 Foods Which Vegans Should Include to Their Diet.

When will World Vegan Day 2020 be celebrated?

The occasion of World Vegan Day 2020, like every year, will be observed on November 1, i.e. Sunday.

What is the history of World Vegan Day?

The Vegan Society was established in 1944, where the idea of observing World Vegan Day was first proposed. Donald Watson, in November that year, called five fellow non-dairy vegetarians to explore more about vegan lifestyles. There were several oppositions to the idea initially, but the idea prevailed eventually. However, the official observance of World Vegan Day began only in 1979. Since then, every year, November 1, is observed as World Vegan Day. How to Go Vegan: Beginners Tip to Help You Stick to the Cruelty-Free Lifestyle.

Every year, The Vegan Society observes the World Vegan Day based on a specific theme. However, the official theme for the World Vegan Day 2020 event hasn’t been decided yet. Also, themes of World Vegan Day are based on promoting and educating about veganism across the world. How to Go Vegan on a Budget? Genius Ways to Save Hundreds of Rupees on Groceries.

What is the significance of observing World Vegan Day?

Being a vegan is a lifestyle choice for every individual. From not being able to consume dairy products, meat, eggs, and a lew of other products have its pros and cons. For those who can maintain a healthy lifestyle, being a vegan, it’s a good health choice. There are several health benefits which people experience after adopting veganism. Several top celebs have pledged to a vegan lifestyle in the last couple of years.

If you are excited by the idea of adopting veganism, do understand the advantages and disadvantages of a vegan lifestyle. Simply adopting it, and not able to find relevant substitutes for key ingredients and nutrients in your diet would only do more harm than good. Vegan Milk Options: From Coconut to Almond, Here Are 5 Types of Non-Dairy Milk For Lactose Intolerant People And Vegans.

There are several seminars, workshops, educational tours, etc. that are held throughout the world promoting the benefits and advantages of veganism. In some countries, people celebrate the entire month of November and World Vegan Month. As November 1 nears, we at LatestLY, wish you and your family a very Happy World Vegan Day 2020. We hope you contribute your bit by participating in this global event by adopting (or experimenting) to adopt a vegan lifestyle for a day at least.

(The above story first appeared on LatestLY on Oct 31, 2020 08:54 PM IST. For more news and updates on politics, world, sports, entertainment and lifestyle, log on to our website latestly.com).