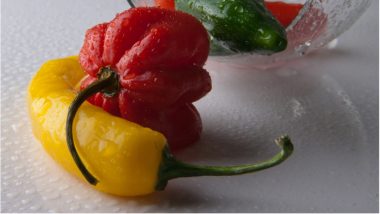 Recently, a 34-year-old man from New York participated in a hot pepper eating contest which landed him in the hospital. Soon after eating the world’s hottest pepper – Carolina Reaper – he developed pain in his neck that turned into a series of thunderclap headaches. The Carolina Reaper – red and gnarled with a small pointed tail – is officially the world’s hottest chilli pepper as recognised by the Guinness World Records. Carolina Reaper enters the record at 1.5 million Scovilles – the measurement scale of how spicy a chilli gets. Capsaicin is the active ingredient in chilli peppers responsible for their unique hot flavour and is found in each type of pepper. Let’s understand what the several health benefits and side-effects of are of eating hot peppers.

Chilli peppers are a popular spice in many parts of the world, well-known for their hot, pungent flavour. We learned that capsaicin is associated with many health benefits as well as side-effects. In the end, it is important to keep in mind that the effects of hot chilli peppers vary from person to person and on the quantity. It may be healthy for many people, while those who experience digestive distress should avoid them.

(The above story first appeared on LatestLY on Apr 11, 2018 10:43 AM IST. For more news and updates on politics, world, sports, entertainment and lifestyle, log on to our website latestly.com).