Happy Bihar Diwas 2021! Did You Know There Is a Patna in Scotland? On Bihar Foundation Day, Learn About This Scottish Village

Miles away from the capital city, Patna in Bihar, lies its namesake in Scotland. The name is not any coincidence and has a significant Indian connection. On Bihar Foundation Day, here we know a little more about this village in East Ayrshire, Scotland. 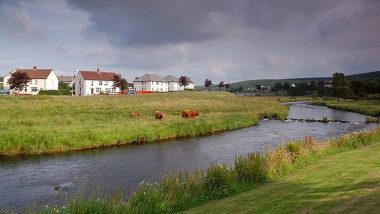 Every year on March 22, people in India celebrate the formation of Bihar as a separate state in 1912. It was this day when the British carved out the state from Bengal. Several cultural events are being held in towns and villages to mark the historic day. While we continue to celebrate Bihar Diwas 2021, today, there is something very interesting, you must know! Miles away from the capital city, Patna in Bihar, lies its namesake in Scotland. Yes, you read that, right! The name is not any coincidence and has a significant Indian connection. On Bihar Foundation Day, here we know a little more about this village in East Ayrshire, Scotland.

Where Is Patna in Scotland?

Located 11,000 km away from Bihar’s capital and 72 km away from Glasgow, the village of Patna lies between the Carrick and Kyle districts in the East Ayrshire, Scotland. Unlike the city in India, which is large in size and densely populated, a Scottish village is rather a peaceful place with few primary and secondary schools, library, doctor’s surgery, games hall, shops and more.

What’s With the Name?

The Scottish Village, Patna, was founded in the early years of the 19th century by Scottish soldier and statesman William Fullarton. It is believed that Fullarton’s family had a close connection with the Bihar state, which is why he named the village after the capital city of the Indian state.

How Is the Scottish Village Connected to Indian City?

Fullarton was born in Patna, India. His father, John Fullarton, served as a major general in the British Army between 1744 and 1766 was posted in Bihar. His uncle, too, served in India under the East India Company as a surgeon at Calcutta’s Fort William. The family had a close connection with the local community. William Fullarton was born in Patna, where he spent his formative years. It was in 1802, he returned to Scotland to take up the reins of a mining business in East Ayrshire—the region had an abundance of coal and limestone. Bihar Diwas 2021 Date, History and Significance.

To provide housing for people who worked on his estate, significantly as miners, William founded a village in the area and named it in the fond memory of his birth city in India. Fullarton also constructed a bridge (now known as Patna Auld Bridge) that remained in service for 155 years until a new bridge became operational in 1960.

The Scottish Village eventually grew to a rather peaceful settlement of people who engaged themselves in wool weaving and cattle rearing, other than mining. What a connection, right? So, once the pandemic is over and you plan to travel to Scotland, don’t forget to visit Patna’s colonial cousin!

(The above story first appeared on LatestLY on Mar 22, 2021 11:07 AM IST. For more news and updates on politics, world, sports, entertainment and lifestyle, log on to our website latestly.com).