The Indian Railway Catering and Tourism Corporation (IRCTC) has launched a special Leh-Ladakh holiday package. The package has been designed especially for the people of Uttar Pradesh. 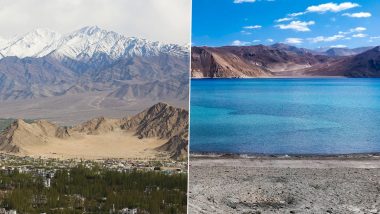 Lucknow, September 23: The Indian Railway Catering and Tourism Corporation (IRCTC) has launched a special Leh-Ladakh holiday package. The package has been designed especially for the people of Uttar Pradesh so that they could plan a holiday for the tour to Ladakh, an IRCTC official told CNN News18. The pocket-friendly package will reportedly include both to and from train and air travel and will commence from Lucknow. Tourists can book tickets online at the IRCTC tourism website www.irctctourism.com. Anurag Thakur To Inaugurate 1st Himalayan Film Festival on September 24 in Leh, Ladakh.

“The special Leh Ladakh package has been introduced by the IRCTC on the demand,” reported the media house quoting the IRCTC official as saying. The seven-day Leh-Ladakh tour will start on September 27 and will; end on October 3. The tour will start from Lucknow. On the first day of the trip, tourists will travel to Delhi via air or the Tejas Express. Char Dham Yatra 2021: IRCTC Starts Special Train For Pilgrimage Under Govt's 'Dekho Apna Desh' Initiative; Check Price And Package Details Here.

The IRCTC will arrange the stay of the passengers in a three-star hotel. It will also include breakfast, lunch and dinner. Travel enthusiasts will be taken to popular tourist destinations in Ladakh. The sightseeing will also include Buddhist Stupa, Math Darshan, Leh Palace, Shanti Stupa, Gurudwara, the IRCTC official told News18.

An adventure camp will be organized by the IRCTC at the Nubra Valley. It will be an overnight stay. The popular destinations where the tourists will be taken also include Diskit, Hunder and Turtuk villages in Leh Ladakh. Tourists need to pay Rs Rs 38,600 per person for couple bookings. Meanwhile, for a booking of three, people need to pay Rs 37,700 per person.

(The above story first appeared on LatestLY on Sep 23, 2021 08:19 PM IST. For more news and updates on politics, world, sports, entertainment and lifestyle, log on to our website latestly.com).