In 2020, many offline activities were affected by the COVID-19. With the implementation of effective measures to prevent and control the epidemic in 2021, activities in some areas are now gradually being restored offline. 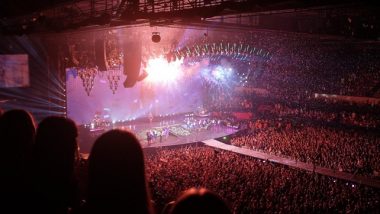 In 2020, many offline activities were affected by the COVID-19. With the implementation of effective measures to prevent and control the epidemic in 2021, activities in some areas are now gradually being restored offline. After the UK tour in 2020, the Whitney Houston holographic concert approved by the manor will kick off in Las Vegas, with a six-month performance. Tickets are on sale on the website.

It is reported that the Whitney Houston holographic concert, which has obtained the heritage standard, will arrive in Las Vegas in October and will start a long-term stay from Harrah's Las Vegas. It is worth mentioning that this concert will duplicate the live performances of American music superstar Whitney Houston in past concerts in the form of virtual images, including live bands, back-up singers and dancers.

It's reported that the Las Vegas Review, although holographic technology has been used in other star performances, the Whitney Houston holographic concert is a full-scale holographic production performance. It will show Houston's most iconic songs, including "I will always love you" and "I want to dance with someone", so that the classics will pass on.

In fact, holographic technology can also be seen in recent years. Since the Spring Festival Gala in 2015, a show called "Shu Embroidery" has impressed many people performed by Li Yuchun, a popular singer. She suddenly appeared in three avatars during the performance, forming four peculiar scenes on the same stage, which triggered a lot of discussion on social media.

At Jay Chou's world tour concert, Deng Lijun, a national treasure in the history of pop music who was dead, was reconstructed in a holographic three-dimensional way, realizing a duet with Jay Chou.

Nowadays, almost every large-scale performance party and star concert will arouse the discussion about the holographic technology integrated into stage art. Holography is technology that records light and presents it in a three-dimensional way to the viewer. There are various types of holograms, including rainbow holograms and transmission holograms, allowing light to shine through them. In the traditional sense, naked-eye 3D technology and immersive experience are often used in the entertainment industry.

Of course, in order to better explain the reasons and history of the collection, some museums also use holographic projection technology with hundreds of billions of large pixels to explain the dynamic pictures. It is common to use screen holographic projection technology in most of the program stages. Choose some screen that is dense and thin made of yarn, which is difficult to be seen in a dark environment, as if the image appears by magic. Presented on the stage, giving people a visual impact, thereby attracting more users to watch the program.

In the 21st century, science and technology continue to advance, VR, AR and other scene experience projects have been developing with accelerated and once again attracting attention. Coupled with the maturity of 5G, its application will embrace brighter prospects and the virtual world will gradually become the real world. The development of 5G networks has a profound impact at varying degrees on society, from food, clothing, housing, transportation to social entertainment and technological development.

For the AR industry, lighter, high-resolution terminal innovation is the key. Low-latency encoding and the high-bandwidth and low-latency capabilities of optical fiber and 5G dual Gigabit networks are guaranteed. In the three development trends of terminals, content, and networks, 5G plays an obvious role.

Major operators and mainstream enterprises are actively creating new services and spawning new arrangements in the converged application model facing the 5G future. As one of the models in the field of holographic vision, WiMi Hologram (WIMI) has launched a holographic cloud platform for holographic AR applications, which is very popular. Its commercial application scenarios are mainly in home entertainment, light field theater, performing arts system, commercial publishing system and advertising display system.

WIMI was established in 2015 with the stock code: WiMi. As one of the first participants in the holographic AR field, WIMI strives to push holographic AR technology to the world step by step. In the New Year's Eve concert, WIMI ingeniously designed 5G+AR and other technologies. The 5G interactive live stream room creates an immersive experience of the entire online scene. The audience can interact with their idols intimately and feel the dreamlike presence. It can be said that the combination of holographic technology and 5G fully integrates reality and virtuality, which not only brings shocking stage performances to the audience, but also allows the audience to enjoy a brand new visual feast.

Holographic technology has been developed for more than 20 years. WIMI promotes the use of multimedia, three-dimensional modeling, real-time tracking and registration, intelligent interaction, sensing and other forms of holographic technology to virtualize computer-generated text, images, three-dimensional models, music, and videos. After the information is simulated, it is applied to the real world. WIMI has become a leader in this field to build a modular holographic stage.

WIMI insists on promoting cultural innovation with holographic technological innovation. It continues to improve its ability to obtain IP and content creation, which will have the opportunity to create a greater scale of market.

In addition, WIMI's content storage has been enriched by copyrighted content licensed from elsewhere and at the same time, it has cooperated with various content owners, including brand owners, film producers and talent agents, to well transform high-quality IP into AR form.

Moreover, it is learned that the WiMi holographic stock research report shows that it has been in a leading position in the AR industry market for a long time. WIMI has established a professional industrial investment fund to invest, and the R&D cost invested is no less than tens of million yuan. The funds are mainly used for technology R&D, copyright purchase, IP content expansion, and contributing to apply AR to practical applications.

The products and solutions currently provided by WIMI are mainly aimed at holographic AR based on 2D screens and holographic AR based on 3D space. Through WIMI holographic computer technology, virtual information is applied to the real world, allowing animation, 3D models, videos, etc. to interact with the audience or users on the big screen. For different scene functions, the technology can achieve the rendering priority and technical practices including matching differentiated vertices and texture accuracy, gradient adjustment of the visual quality of virtual advertisements, and optimizing the performance.

The business covers from computer vision production, service platform construction, to cloud software development and technical support. Compared with other peer companies, it has more comprehensive and sustainable capabilities. The spokesperson of WIMI once stated that their vision is to "become the creator of holographic ecology."