An Austrian man from the southern city of Graz had been bitten by his neighbour's pet python on Monday morning when he went to his toilet in his apartment. 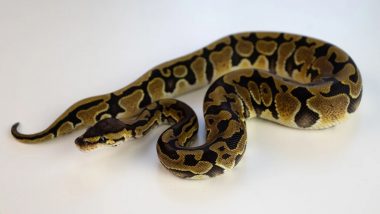 Have you ever got bitten by a snake? If not, then you are lucky enough. On Monday, a 65-year-old Austrian man got bitten in the genital area by a python. The man from the southern city of Graz was bitten by his neighbour's pet python around 6 am when he went to his toilet in his apartment. The snake escaped from his neighbour’s apartment and ended up in his toilet.

The police in the province of Styria said in a statement that the man felt a 'pinch' on his genitals when he just sat down on the toilet and when he turned around he saw a 1.6-metre albino reticulated python in the bowl staring back at him. "Shortly after he sat on the toilet the Graz resident - by his own account - felt a 'pinch' in the area of his genitals," the police statement said.

The man then called the officers, who arrived at the spot with a local reptile expert. They went to remove the snake from its hiding spot. Reportedly, the man suffered from 'minor injuries' and had been taken to the hospital for further treatment.

As per the medics, there was a risk that the bite of the python could become infected from bacteria in the toilet; however, pythons are not venomous.

The reptile expert, Werner Stangl said the python was also uninjured. Later, the snake was cleaned and was returned to its 24-year-old owner, who is the victim’s neighbour.  As per the police, the man keeps total non-venomous snakes and a gecko as pets in his apartment. He keeps them in specially designed drawers and cages. Although, on Monday, he was unsure that the python escaped from his apartment until the police returned his pet back to him.

(The above story first appeared on LatestLY on Jul 06, 2021 01:30 PM IST. For more news and updates on politics, world, sports, entertainment and lifestyle, log on to our website latestly.com).