After #WearAMask, #OverTheMoon Goes Viral As Twitter Replaces ‘Like’ Heart Button With ‘Spacecraft Over the Moon’ Emoji 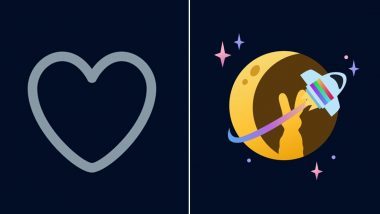 Social media is currently the best place to be in. The pandemic has sure put the life into a halt, but that has not really dampened the spirit of netizens on the internet. Each day there are some new trends appearing online, and at times, Facebook, Twitter, Instagram and other social media platforms also come up with their own unique ways to keep users engaged. Yesterday, it was #WearAMask running as one of the top trends online as Twitter reminded netizens on the importance of wearing a mask amid the pandemic. The like heart button was replaced with an emoji wearing a face mask. And today, it is #OverTheMoon. Once you react or like a tweet, the heart button is replaced with a spacecraft over the moon emoji.

It is not directly known as to why Twitter replaced the heart icon with a spacecraft and a moon. The European Space Agency reacted to this trend. “We think our @esaspaceflight #Orion European Service Module teams might 'Like' this one (hint: tap "Like"),” reads the tweet.

Again, the National Aeronautics and Space Administration (NASA) also published an Artemis Plan to land first woman, next man on Moon in 2024. Although the reason behind Twitter replacing the heart icon with a spacecraft over the Moon is not immediately known, but it surely has impressed the astronomical lovers, as they trend #OverTheMoon on Twitter, reacting to tweets to enjoy the icon.

Another day.. another animation on like button #OverTheMoon pic.twitter.com/zqX7eCKCYo

And They Are Clearly Obsessed!

Tap the like button for a surprise #OverTheMoon pic.twitter.com/EakrFBBiAZ

Aside from #OverTheMoon, #WearAMask, Twitter had earlier replaced the  heart icon with LGBTQ+ Pride flag emoji to honour the queer community. Netizens were all obsessed with the viral trend. It is fun to see these small inclusions on the microblogging platform as it increases the engagement of users on social media for better.

(The above story first appeared on LatestLY on Sep 22, 2020 06:54 PM IST. For more news and updates on politics, world, sports, entertainment and lifestyle, log on to our website latestly.com).