Amrik Sukhdev Dhaba, a popular restaurant in Haryana's Murthal, is serving food free of cost to farmers marching towards Delhi to protest against the Centre's three agricultural laws. 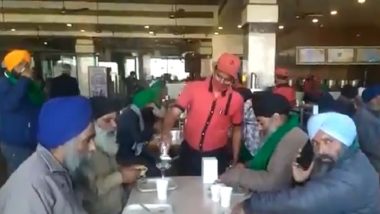 Murthal, November 27: Amrik Sukhdev Dhaba, a popular restaurant in Haryana's Murthal, is serving food free of cost to farmers marching towards Delhi to protest against the Centre's three agricultural laws. A video of farmers having food at Amrik Sukhdev Dhaba is widely circulated on social media with people praising the restaurant for their kind gesture. Farmers' Protest Allowed at Delhi's Nirankari Ground, Traffic Jams at Delhi-Gurugram Border - 10 Points on 'Dilli Chalo' Agitation.

In the video, several people, including the protesting farmers, are seen having food at Amrik Sukhdev Dhaba, which is along the highway that connects Delhi with Haryana, Punjab and other states. According to reports, more than 2000 farmers were served free food by the restaurant on Friday. "There is no one bigger than anndata, we will not let farmers go hungry in Murthal," the restaurant owner told a news channel. Sukhdev Dhaba of Murthal Hit by Coronavirus, 65 Employees Test COVID-19 Positive.

Reportedly, the owner of the #Haryana based dhaba said farmers are the biggest providers and that they will not face any shortage of food during their protest#FarmersProtest pic.twitter.com/8IbzOl6HCS

Great job .Some business men r also here to whom profit is not everything .

This is MY INDIA!

I didn't use to like Amrik Sukhdev, but today the dhaba has found a new admirer in me. Brilliant work the management and the workers there. Feeding farmers is always special. 🙌🏽👏🏽#FarmersProtest #AmrikSukhdev pic.twitter.com/oeBQlR1zKe

The dhaba-cum-hotel-cum wedding venue is a favourite halt point for travellers, especially people coming from Delhi-NCR. Thousands of farmers had yesterday braved tear-gas shells, water cannons and police barricades to enter Haryana from Punjab. They had to face tear-gas shells and water cannons once again when they reached Delhi borders.

They were later allowed to enter the national capital and to stage a protest at Nirankari ground in Burari. Farmers are reaching Delhi to participate in "Dilli Chalo" stir to register their protest against the Centre's three farm-related laws.

(The above story first appeared on LatestLY on Nov 27, 2020 10:24 PM IST. For more news and updates on politics, world, sports, entertainment and lifestyle, log on to our website latestly.com).