Ariana Grande and Dalton Gomez Get Married In a Private Ceremony; Netizens Pour In Congratulatory Messages Full of Happy Quotes and Funny Memes!

Ariana Grande finally got married to her long-term boyfriend Dalton Gomez in a private ceremony in California. Their fans are all excited now and they are pouring in congratulatory messages for them on Twitter. 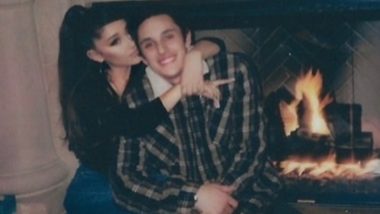 Popstar Ariana Grande and her long-term real estate agent beau have finally tied the knot over the weekend in California in a private ceremony.  The duo started dating each other in January 2020 and they got engaged five months back. In December 2020, the Thank U, Next singer announced her engagement with Dalton Gomez.  After their engagement, Ariana took to her Instagram handle to share a picture of them, wherein she flaunted her beautiful engagement ring. And she captioned the picture as, "Forever and then some."

Now,TMZ.com was the first to announce that Ariana, 27, and Dalton, 25 got married at their home in Montecito, California. Ariana’s representative also confirmed the news to PEOPLE. According to Grande’s representative, it was a ‘tiny and intimate’ wedding, where less than 20 people were present. “The room was so happy and full of love. The couple and both families couldn't be happier," the rep added.

According to the PEOPLE’s report, a close source said, "Both Ari and Dalton love Montecito. They spend a lot of time there. It seems only natural that they would get married at Ari's beautiful and historic house."

After Ariana and Dalton's wedding news came to the surface, fans cannot keep calm and they are pouring in congratulatory messages full of happy quotes and funny memes on Twitter.  Take a look:

Okay. Who's got those Ariana Grande wedding photos. Show them. pic.twitter.com/HKv1hSCrbX

so ur telling me ariana got married without inviting me?? #ArianaGrande pic.twitter.com/yfuEi4rDBF

#TMZ reports that this was ariana grande's wedding outfit pic.twitter.com/EvEZLndHP1

Previously, Ariana was engaged to Saturday Night Live comedian Pete Davidson but they got separated after five months of their engagement. She was also in a long relationship with rapper Mac Miller, who passed away about four months after their relationship ended.

(The above story first appeared on LatestLY on May 18, 2021 09:52 AM IST. For more news and updates on politics, world, sports, entertainment and lifestyle, log on to our website latestly.com).