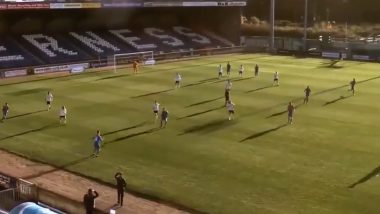 Move to AI they said. Ditch Human cameramen they said. Well, upgrading to Artificial Intelligence technology didn't work well enough after the Scottish football team Inverness Caledonian Thistle FC witnessed a hilarious glitch that will leave you ROFLing. For this match that opted for AI cameras that do not need to be manned by humans. These no camera operator cameras can detect the motion of the game and capture accordingly.  However, things took a hilarious turn when these AI cameras mistook the referee's bald head for a football and followed it instead for the ball. Two Kangaroos Disrupt Football Game As They Were Spotted Hopping on the Ground in New South Wales (Watch Video).

The club had earlier announced at they would now use the new "Pixellot system uses cameras with in-built, AI, ball-tracking technology" to capture HD footage of all home matches at Caledonian Stadium. However, a linesman with a bald head was enough to give these cameras a run for its money after it followed the bald head thinking of it to be a football. Video of Andrea Pirlo Outfoxing Cristiano Ronaldo Goes Viral Following Former AC Milan Midfielder’s Appointment As Juventus Manager.

The AI camera kept focusing on the linesman instead of the actual game which left fans complaining. Some even said that they missed their team's goal because the camera "kept thinking the Lino bald head was the ball". A Twitter user wrote: "Inverness Caledonian Thistle don’t employ a cameraman as their camera is programmed to follow the ball throughout the match. The commentator had to apologise today as the camera kept on mistaking the ball for the linesman’s head..."

The game was played with no fans allowed in the stadium due to COVID-19 restrictions. The object recognition technology could clearly do with a bit of a tweak, or else the team might actually have to implement the policy of bald referees being forced to wear a sombrero to differentiate themselves from the ball.

(The above story first appeared on LatestLY on Oct 31, 2020 11:51 AM IST. For more news and updates on politics, world, sports, entertainment and lifestyle, log on to our website latestly.com).