Bestest Doggos Ever! Pictures of Service Dogs Attending Theatre Performance at Stratford Festival in Canada Has Netizens Cheering For Them 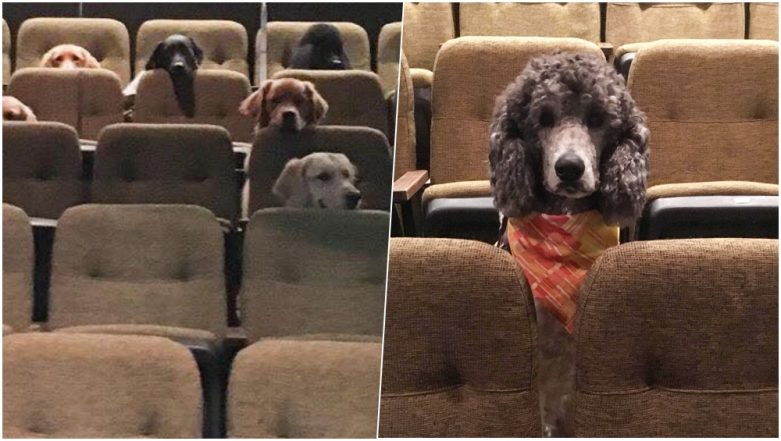 Every fancy pet dog or cat watching TV, especially when they brak at the animals on screen? It is fun to watch these animals being amused by others of their kind on the TV sets or computer. But imagine a theatre full of dogs with a play being performed in front of them? That's exactly what happened at the Stratford Festival in Canada with a group of pooches training to be service dogs. The dogs were attending a performance of Billy Elliot – The Musical and a picture from there has been shared online. The picture is adorable and getting all the love from netizens calling them the bestest doggos ever. Pictures of Pack Walking Dogs by Saratoga Dog Walkers in New York Are Full of Squad Goals! View Pics.

In the photo, a group of pooches are seen sitting in discipline facing towards the stage. The activity was coordinated by Laura Mackenzie, owner and head trainer with K-9 Country Inn Working Service Dogs. Talking about this activity she said, "It’s important to prepare the dogs for any activity the handler may like to attend. The theatre gives us the opportunity to expose the dogs to different stimuli such as lights, loud noises and movement of varying degrees. The dogs must remain relaxed in tight quarters for an extended period of time." Golden Retriever as Mayor! Californian Town Elected a Dog, View Cute Pics of Max.

Here's The Picture of Dogs Attending Theatre at Stratford Festival:

Service dogs at a relaxed performance at @stratfest @dog_rates pic.twitter.com/0SXRpAz4EX

"so what is this film about anyways pup"

ICYMI: We had some pawsitivly adorable audience members from K-9 Country Inn Service Dogs during last weeks Relaxed Performance of #sfBillyElliot. Our Next Relaxed Performance is #sfNeverending on October 2nd. https://t.co/xaBwx65W8J pic.twitter.com/otyNjm5pUS

They deserve a standing ovation

They don't talk during the show, don't spoil the details and never kick the seats.

This is absolutely the very best in class. Such intelligent animals. Love how they are sitting so quietly watching attentively. Beautiful

Isn't it adorable? Netizens too are full of awe to see the pooches being so disciplined, actually enjoying a show as a dedicated audience. During the training, the dogs and their handler teach to navigate safely through crowds, fit into aisles and ignore all distractions in the way. And such cute members in the audience also build up confidence among the performers on stage. Since Billy Elliot has a lot of child performers, it adds to their enthusiasm.