BTS Takes a Stand Against Asian Hate with an Emotional Strongly-Voiced Statement, Massive Reactions from the ARMY About Anti-Asian Violence Follow

Popular K-pop group BTS has put forth an emotional yet strong stance against Asian Hate crime showing its support for the Stop Asian Hate movement. A wave of 'Asian Lives Matter' online and offline protests have been taking place that as a result of increased incidents of hate crimes against Asian-Americans and Pacific Islanders. 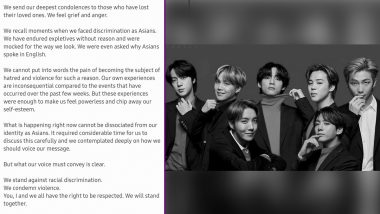 Popular K-pop group BTS has put forth an emotional yet strong stance against Asian Hate crime showing its support for the Stop Asian Hate movement. A wave of 'Asian Lives Matter' online and offline protests have been taking place that as a result of increased incidents of hate crimes against Asian-Americans and Pacific Islanders. Bangtan Boys aka BTS including members Jin, Suga, J-Hope, RM, Jimin, V and Jungkook unanimously shared a statement both in Korean and English against rising Asian Hate crimes. BTS began with sending "deepest condolences to those who have lost their loved ones". The statement further read: "We feel grief and anger. We recall moments when we faced discrimination as Asians. We have endured expletives without reason and were mocked for the way we look. We were even asked why Asians spoke in English."

They also threw light on their own experiences with racism that made them feel "powerless"  and "chip away" at their self-esteem. The statement further read: "We cannot put into words the pain of becoming the subject of hatred and violence for such a reason. Our own experiences are inconsequential compared to the events that have occurred over the past few weeks. But these experiences were enough to make us feel powerless and chip away our self-esteem. What is happening right now cannot be dissociated from our identity as Asians."

BTS also said that it took them "considerable time" to address the issue as they were deciding on how exactly to communicate this important message. They strongly concluded the message with: "But what our voice must convey is clear. We stand against racial discrimination. We condemn violence. You, I and we all have the right to be respected. We will stand together."

Massive Reactions from the ARMY About Anti-Asian Violence:

thank you for sharing your story, for conveying such a powerful message, thanh you for comforting me. As an Asian, i can understand your feeling. And thank you for letting me know that i'm not alone, and so are you, we’ll always fight together. I love you 💜

thank you for always using your voice to spread awareness about important issues. we will continue as one fighting against injustice, for our rights, our brothers and sisters, for a world where there is no racism and discrimination. #StopAsianHatehttps://t.co/nBt6B4Ee2Z

Racism, Xenophobia, Bigotry - No matter what name you call it, it is disgusting! Every human being have the right to be respected! It doesn't matter who they are! Human being should be treated with respect regardless of race! 🥺💜 #BTSARMY #StopAAPIHate #StopAsianHate @BTS_twt pic.twitter.com/eCUl41KL1l

In the wake of the Atlanta Shooting that took place on March 16 killing eight people, Anti-Asian hate crime protests have been taking place around the world both offline and online. The victims lost their lives in a series of shootings at three Atlanta spas or massage parlours and out of them, six were Asian women. Anti-Asian hate crimes have seen a shocking rise ever since the COVID-19 pandemic with a spike by 150 percent in 2020 alone, as per the Center for the Study of Hate and Extremism. Officials released the names and ages of all eight victims that are: Delaina Ashley Yaun Gonzalez, 33; Paul Andre Michels, 54; Xiaojie Tan, 49 and Daoyou Feng, 44, were identified Wednesday, and Hyun Jung Grant, 51; Soon Chung Park, 74; Suncha Kim, 69; and Yong Ae Yue, 63, were identified Friday. A ninth person, Elcias R Hernandez-Ortiz, 30, was shot and injured. The accused, a white man has been charged with eight counts of murder. This has led to widespread criticism as the shootings appear to be at the "intersection of gender-based violence, misogyny and xenophobia" as per reports.

The rise in hate crimes targeting Asian communities is global, with increased reports coming from Canada, and a number of cases involving anti-Asian discrimination and xenophobia reported by Human Rights Watch in Italy, Russia and Brazil last summer. In New Zealand, research by the New Zealand Human Rights Commission released last month found that 54% of Chinese respondents had experienced discrimination since the start of the COVID-19 pandemic, and 55% of Māori respondents had also faced discrimination since the start of the pandemic.

(The above story first appeared on LatestLY on Mar 30, 2021 02:24 PM IST. For more news and updates on politics, world, sports, entertainment and lifestyle, log on to our website latestly.com).