'Charlie Bit My Finger' One of First Viral Videos, Recreated by Brothers After 13 Years! Watch New Clip of Siblings All Grow-Up 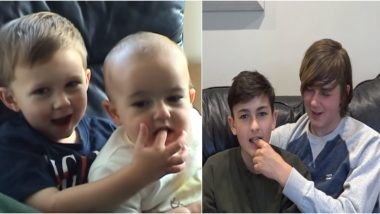 Video of two brothers had gone viral 13 years which made them super popular. The clip was of the younger one biting a finger of the elder one and subsequently both laughs. The video of the babies went massively viral and continue to be watched by people across the globe. It was one of the first videos to go viral on YouTube. Harry Davies-Carr was aged three and Charlie Davies-Carr was one at that time when the video was taken. In it, Harry giggles when his younger brother bites his finger. The elder one then puts his finger back into Charlie's mouth and Charlie bites harder. Soon he lets g off the finger and begins laughing, who is joined by Harry. In it, Harry says 'Charlie Bit My Finger' and now everyone knows them by that phrase. Toddler Happily Chews Jalapeno Pepper and Realises It Was a Bad Idea! Funny Video Goes Viral.

Charlie and Harry had recreated the video three years ago for ten year anniversary of their viral video. The clip was also shared widely on social media platforms.

Also, now Charlie has a Twitch, YouTube and Instagram channels, where he plays video games for his followers. The video helped the family financially as brands approached them for advertising and sponsorship deals. They used the money in buying a new house. While the family was initially glad about their children becoming popular, later they were also worried if it would inversely affect their kids.

Talking about the video, the boys' father Howard Davies-Carr told ABC News, "When the boys get to 18, I'd like them to think back and think, 'O.K., I've got something in my life which is more than just what I was when I did the 'Charlie Bit Me' video." He added, "I don't quite understand why people keep watching it and why they find it so exciting, but people do. You know, people leave lovely comments back to us saying we watch this video almost every day."

(The above story first appeared on LatestLY on Jul 08, 2020 01:21 PM IST. For more news and updates on politics, world, sports, entertainment and lifestyle, log on to our website latestly.com).