The fake and misleading news report that is widely circulated on Facebook, WhatsApp and Twitter claims that the Modi government has planned to cut the salaries of the government employees in a graded manner. 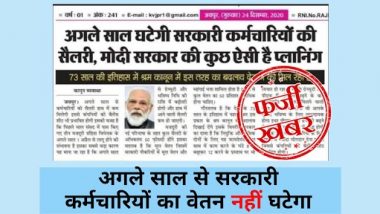 Dismissing the fake claims, a fact check by the Press Information Bureau (PIB) stated that the government has not issued any such order. It said that all the claims made in the news article are fake and completely baseless. Giving a clarification on the fake news, the PIB said that the Wages Bill, 2019 is not applicable for Central and State government employees. Central Government Employees to Face Salary Cut? Finance Ministry, Jitendra Singh Term Report Suggesting Pay Deduction Fake News.

In a news article, it is being claimed that due to changes in labour laws, the salary of government employees will be reduced from 2021.

A fact check by PIB states that this claim is fake. The Wages Bill, 2019 will not apply to employees of Central and State Governments.

(The above story first appeared on LatestLY on Dec 29, 2020 11:52 AM IST. For more news and updates on politics, world, sports, entertainment and lifestyle, log on to our website latestly.com).