A post claiming that the Supreme Court has approved a logo for teachers that they can put on their vehicles is doing the rounds. PIB fact check has found out that the claim is fake. 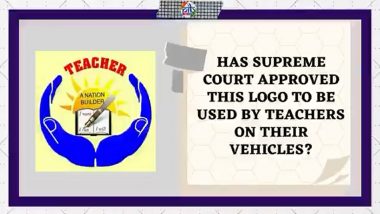 New Delhi, September 17: A post claiming that the Supreme Court of India has approved a logo for teachers is doing the rounds of social media platforms. The post claims that the apex court has approved the logo to be put on the vehicles of teachers. It is being widely shared and circulated on the digital platforms. The post also has an image that is being claimed  as the logo approved for teachers to put on their vehicles by the apex court. Centre has Decided to Expand Branches of Supreme Court to Three More Locations? PIB Fact Check Debunks Fake Claim, Reveals Truth.

Debunking the false information, a fact check undertaken by the Press Information Bureau (PIB) has found out that the claim being made in the viral post is fake. PIB further clarified that no such directive has been issued by the Supreme Court. It has also asked the people to refrain from forwarding such false messages. Centre has Removed The Column of Nationality from Indian Passport? PIB Fact Check Debunks Fake Claim, Reveals Truth.

A post claiming that the Supreme court has approved a logo for teachers to put on their vehicles is in circulation.#PIBFactCheck

▶️No such directive has been issued by the Supreme court.

People have been time and again cautioned against such fake news doing the rounds on various social media platforms by various competent authorities. General public has been advised to rely only on notifications from verified sources and relevant authorities for any information. People should also refrain for sharing and forwarding messages on social media without proper verification of the same to avoid falling such misleading and false claims.

The claim is fake

(The above story first appeared on LatestLY on Sep 17, 2021 10:17 AM IST. For more news and updates on politics, world, sports, entertainment and lifestyle, log on to our website latestly.com).