FAU-G Is Available for Download on Google Play Store! From Funny Memes to Photos and Videos of the Action Game, Netizens Share Reactions on Social Media

FAU-G is available for download on Google Play Store and gamers cannot keep their calm. The first impressions and reactions are pouring in on Twitter with funny memes and videos from the online game. 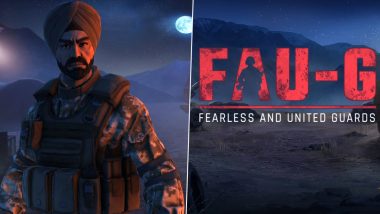 The wait is over! Fearless and United-Guards, aka FAU-G is available for download on Google Play Store and gamers cannot keep their calm. After a long wait, nCore Games finally launched the multiplayer game. The first impressions and reactions are pouring in on Twitter. As expected, from funny memes to sharing photos and videos of the action game, netizens sure is enjoying being ‘Fearless, United Guards,’ in the online game. According to a few Tweeple, this is no PUBG rival but defiantly got potential. As promised, the creators released FAU-G today, on January 26, as India celebrates its 72nd Republic Day. Although, iPhone users will have to wait for some more time as the multiplayer game is only available for Android version, the game enthusiasts flooded social media with reactions as they began playing the highly anticipated FAU-G.

FAU-G has witnessed a massive pre-registration success on Google Play Store, which surpassed five million registrations. The first episode of the game is based on Galwan Valley in Ladakh. The multiplayer game FAU-G gameplay is expected to include missions and episodes that will progress through the story initially. Before the launch, people took to Twitter sharing their queries as to when they can they finally download the game. To end the long-wait, nCore Games tweeted the download link for users to play the action game.

Fight for your country. Protect our flag. Action game FAU-G takes you to the frontlines and beyond! Start your mission today. Jai Hind!

So far, gamers seem to love it. The first reactions are up on social media. While the meme-makers express their joy, sharing funny reactions, others are just stunned with the graphics of the game. Check out how gamers are reacting to FAU-G!

Not a Fan of Online Games?

Me after exhausting my whole internet data for downloading #FAUG game : pic.twitter.com/rwKzAh4Jd5

My other Apps welcoming #FAUG pic.twitter.com/ZPNdR1mvop

#FAUG is now Available on playstore

Me and My Friends: pic.twitter.com/m0R5eyiw8L

Suggestions Are Available Too

FAU-G will allow players to not only step into the shoes of the Indian soldiers, but also contribute to them. nCore Games noted that 20 percent of the game’s revenue would be donated to the ‘Bharat Ke Veer,’ foundation. If you haven’t downloaded yet, CLICK HERE and start playing FAU-G.

(The above story first appeared on LatestLY on Jan 26, 2021 12:33 PM IST. For more news and updates on politics, world, sports, entertainment and lifestyle, log on to our website latestly.com).