Gucci Gloves for Over 30k Have Netizens React with Funny Memes and We're Not Sure If We Should Laugh or Cry!

this new pair of black gloves by Gucci that us taking social media by storm. Somebody on Twitter shared a few pictures of this meshed black gloves by Gucci and netizens have come up with theories of their own. Some of the reactions to the pair of €430 gloves have received are super hilarious. 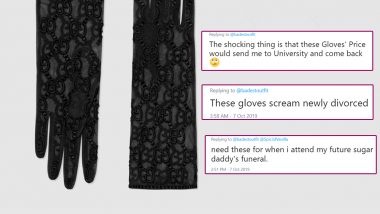 Gucci has been the favourite of the rich since eternity, but time and again they have come up with something that has garnered social media attention and HOW! Just like this new pair of black gloves by Gucci that us taking social media by storm. Somebody on Twitter shared a few pictures of this meshed black gloves by Gucci and netizens have come up with funny theories of their own. Some of the reactions to the pair of €430 gloves have received are in the form of super hilarious memes. BTW, just so the Indians know, the gloves would cost about 33,486.68 Indian Rupee, and I'm fainting already. You could definitely buy a high-end cellphone or at least nice clothes(that is not Gucci) for 2 whole years with that amount for sure. Also know as the Gants en tulle avec motif GG, the gloves are meshed and have Gucci sign all over them and RN they're ruling the internet. Check it out!

Take a Look At The Picture of Gucci Gloves:

need these for when i attend my future sugar daddy's funeral.

Uh, I'm Not Very Sure

Now I Am Sure

Ok. I Didn't See That Coming

And she deffo the murderer

It looks like they fit so bad. I wish I could use them after killing my husband as well.

This part of the 'SelfMade Widow Spooky Fall Collection'?

All This Was Fun And Games Until Someone Pulled Up The Price of These Gloves. Check out:

This isn't the first time, Gucci has made headlines for something ridiculously expensive. Gucci has even previously faced backlash in February for "blackface" fashion, and in May when they sold $790 "Indy Full Turban" online, they offended the Sikh community. Just last year, Gucci made a swimsuit, priced at £290 (Rs 27,653), all stylish but you cannot wear it for swimming in the pool. The chic white piece is made of a material that will spoil if it comes in contact with chlorine, so there go all the dreams of splashing in the pool!

(The above story first appeared on LatestLY on Oct 08, 2019 01:12 PM IST. For more news and updates on politics, world, sports, entertainment and lifestyle, log on to our website latestly.com).