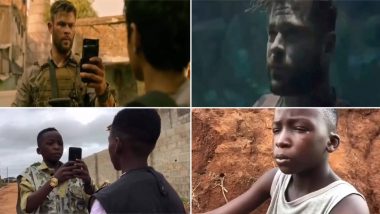 Remember Ikorodu Bois? The Nigerian comedy group that recreates and mimics multi-million dollar music videos and Hollywood movie trailers. Well, they're back and this time they create Chris Hemsworth's very famous Extraction trailer. The Netflix movie produced by Russo Brothers enjoyed great popularity on the OTT platform and its success even prompted the makers to start planning for its sequel. Now months after its release, the very famous Ikorodu Bois have attempted to recreate its action-packed trailer and their attempt is impressive. Avengers: Infinity War Trailer Made in Low Budget by Bunch of College Students Impresses Film's Directors Russo Brothers (Watch Viral Video).

While keeping in mind their own concerns, the group has tried to imitate the trailer frame to frame along with few additional scenes. While one may believe if shooting Hemsworth's action scenes was a tedious task, these young boys have managed to ape them like a pro, not to forget without any stunt doubles or action choreography. They are apparently in love with this Netflix outing and want Hemsworth to see and if possible even appreciate their efforts. We wonder if the Thor actor will come across their tribute and if he does, will he choose to shower them with heaps of praises? Extraction: Chris Hemsworth Expresses His Love for Long Action Sequences and Speaks About the Climax of the Netflix Film.

Check Out Their Attempt

We so much love this movie and we hope @chrishemsworth and @netflix sees this remake, pls retweet 🙏🏽 pic.twitter.com/x47h9UV9Sz

Netflix meanwhile has already appreciated their take by commenting 'Love' on their Twitter video. Chris Hemsworth's Extraction will have part two, though makers are still contemplating if they should make a sequel or a prequel. While the actor's return is still not confirmed, chances of him reprising his role are very rife.

(The above story first appeared on LatestLY on Jun 25, 2020 10:49 AM IST. For more news and updates on politics, world, sports, entertainment and lifestyle, log on to our website latestly.com).