Ssscary! 10-Feet-Long Python Causes Traffic Jam on Busy Highway in Mumbai, Viral Video of the Snake Catchers Carefully Rescuing the Serpent Will Scare the Sh*t Out of You 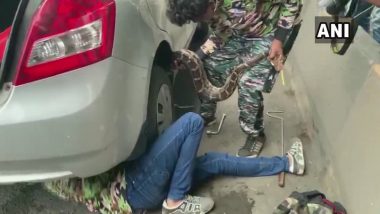 According to the official, the reptile was spotted by motorists on a stretch of the highway at suburban Chunabhatti.  Car drivers and motorcyclists stopped to look at the nearly 10-feet-long snake's attempt to cross the road, causing a traffic jam on the busy highway, he said. Also Read | Snake Swallowed an AK-47? Creepy Photo of Giant Reptile is Going Crazy Viral on Social Media And Netizens Are Questioning Whether Its Fake or Real!

After crossing the road, the python hid under a car. Also Read | CGSOS Results 2020 Declared at cgsos.co.in: Check Class 10, 12 Open Board Exam Scores Released by Chhattisgarh Education Board.

After an hour, a team of snake catchers arrived at the spot and rescued the python, the official said. During the rescue operation, local policemen and their counterparts in the traffic branch also reached the spot and restored normal movement of vehicles, he added.