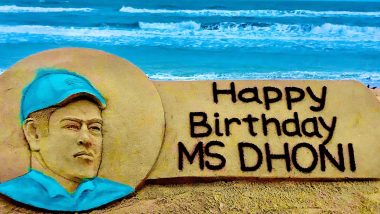 Former Indian captain MS Dhoni celebrates his 39th birthday on Tuesday (July 7) and wishes are pouring in for him from all around the world. On the occasion, Indian sand artist Sudarsan Pattnaik also took to his Twitter page and shared a sand art made by him while wishing the talismanic cricketer on his special day. In the artwork, Dhoni’s face is carved in the sand with a Happy Birthday text written beside it. Fans were amazed when they came across the creative artwork as they filled the comment section with praises. While sharing the snap of his artwork, Sudarsan also posted a heart-warming message for the World Cup-winning captain. MS Dhoni Birthday Special: Huge Sixes by Former Indian Captain That Will Leave You Jaw-Dropped.

“#HappyBirthdayMSDhoni Ji wish you a successful life , Great year ahead Nation is proud of you . One of My SandArt at Puri beach in Odisha . #MSDhonibirthdaym,” wrote the artist while sharing the picture on the micro-blogging website. Meanwhile, have a look at the post. MS Dhoni Birthday Messages: Virat Kohli, Virender Sehwag, Kedar Jadhav, Shikhar Dhawan and Others From Cricket Fraternity Wish CSK Captain As He Turns 39.

#HappyBirthdayMSDhoni Ji wish you a successful life , Great year ahead Nation is proud of you . One of My SandArt at Puri beach in Odisha . #MSDhonibirthday pic.twitter.com/GF2m1Nbfxt

Meanwhile, MS Dhoni's retirement plans still remains a hot topic of discussion among cricket fans. The wicket-keeper batsman hasn’t played a professional match after India’s exit in 2019 World Cup. He, however, was set to lead Chennai Super Kings in Indian Premier League (IPL) 2020. However, the T20 tournament also got postponed due to the COVID-19 break and it will be interesting to see when the veteran cricketer will make a comeback.

(The above story first appeared on LatestLY on Jul 07, 2020 10:40 AM IST. For more news and updates on politics, world, sports, entertainment and lifestyle, log on to our website latestly.com).