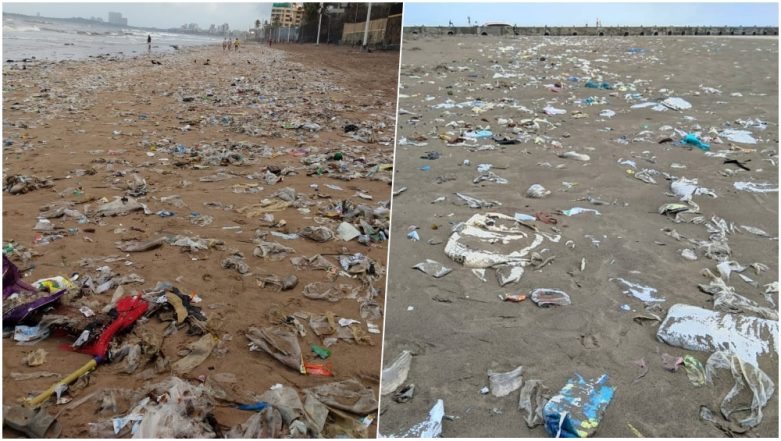 The Juhu beach in Mumbai is one of the famous tourist spots in the maximum city. Most people love catching up on a sunrise/sunset on a good beachside, but the Juhu beach, however, has not remained the same pretty spot as it was years ago. In fact, last year, a very saddening picture came up on the internet which showed the amount of waste that has accumulated on one of the most popular spots in the city. A huge dump of plastic waste is seen on the beach and not much has changed, as the rainy season has once again thrown up all waste in the ocean back at the surface. Netizens are once again wondering what is happening as far as the beach clean up is concerned? Comedian Atul Khatri has shared some insights into the condition of the beach, months later. A Sea of Plastic! Photo Showing Mumbai’s Juhu Beach Covered in Plastic Waste Goes Viral.

Atul Khatri shared a video on his Facebook page, which highlights the waste that has gathered on the beach. Kilometres of the beach expanse is covered in plastic waste. Like each year, the ocean has thrown back all the garbage that is our own. As Khatri mentions, "This is the point of no return." The beach is damaged beyond measure. While Khatri also keeps his comic sense intact, he wants to get across the message that it is really high time and we need to do something to stop this litter and plastic pollution. Meanwhile, the condition of the beaches is also a concern of several citizens, who have highlighted the issue. People keep on sharing and resharing the old pictures but we also need equal action than just voicing it out. Ganpati Visarjan 2018: Arabian Sea Vomits Thousands of Dead Fishes, Turtles at Juhu & Dadar Beaches Following 7th Day Immersion.

Here are some pics and videos of waste on Juhu beach:

Pathetic condition at Juhu beach. Avoid going for few days as it's too crowded and dirty. #mumbairains #juhubeach pic.twitter.com/0dy1q2QYCG

The sea giving it back

What you throw into the sea comes back to you.

It is indeed sad that as heavy rains continue, more waste from the sea is coming back to the beach and making it dirtier. As citizens, it is our duty to take the first steps of not littering than complaining to the authorities of cleaning it all up. While there are certain clean-up drives that are held once in a while, clearing the massive mess requires continuous efforts from time to time and support from more people to make it all possible.