Niagara Falls in Canada Illuminated in Tricolour to Honour 74th India’s Independence Day, View Stunning Pics and Video That Will Swell Your Heart With Pride

Niagara Falls in Canada was illuminated in tricolour, and it looked stunning. The falls was glowing in the colours of the Indian flag, and the pictures and video will swell your heart with pride and happiness. 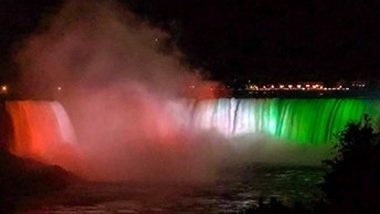 On August 15, 2020, India celebrated its 74h Independence Day. The nation was painted in tricolour, with limited events and functions, keeping the coronavirus pandemic in view. People have flooded their social media platforms with beautiful images and videos, sharing patriotic quotes, remembering the nation’s freedom struggle with the slogan, ‘Jai Hind.’ While the country observed Independence Day 2020 in its own traditional way, other parts of the world honoured its freedom struggle too. Niagara Falls in Canada was illuminated in tricolour, and it looked stunning. The falls was glowing in the colours of the Indian flag, and the pictures and video will swell your heart with pride and happiness.

To mark India’s Independence Day, many monuments and popular places across the world lightened up with tricolour. World’s tallest building, Burj Khalifa in Dubai as well was illuminated with the colours of the India flag to mark the nation’s Independence Day. Again, the Flag of India was also raised at Toronto’s City Hall, while the three-dimensional Toronto sign, was lit in the hues of the tricolour.

The flag-hoisting at Niagara Falls was officiated by India’s Consul General in Toronto, Apoorva Srivastava, at an event organised by the Ind-Canda Arts Council. According to reports, the special lighting was conducted with the cooperation of the Niagara Falls Illumination Board and Niagara Parks Commission, with the support of the city of Niagara Falls. News Agency, ANI posted pictures and video of the Niagara Falls, and it is looking gorgeous. Happy Independence Day 2020 in Pics: Sansad Bhavan, Charminar and Other Iconic Places in India Light Up in Tricolour.

Watch Video of Niagara Falls in the Hues of Tricolour

Niagara Falls is a group of three waterfalls at the southern end of Niagara Gorge, spanning the border between the province of Ontario in Canada and the state of New York in the United States. The largest of the three is Horseshoe Falls, also called Canadian Falls.

(The above story first appeared on LatestLY on Aug 16, 2020 10:17 AM IST. For more news and updates on politics, world, sports, entertainment and lifestyle, log on to our website latestly.com).