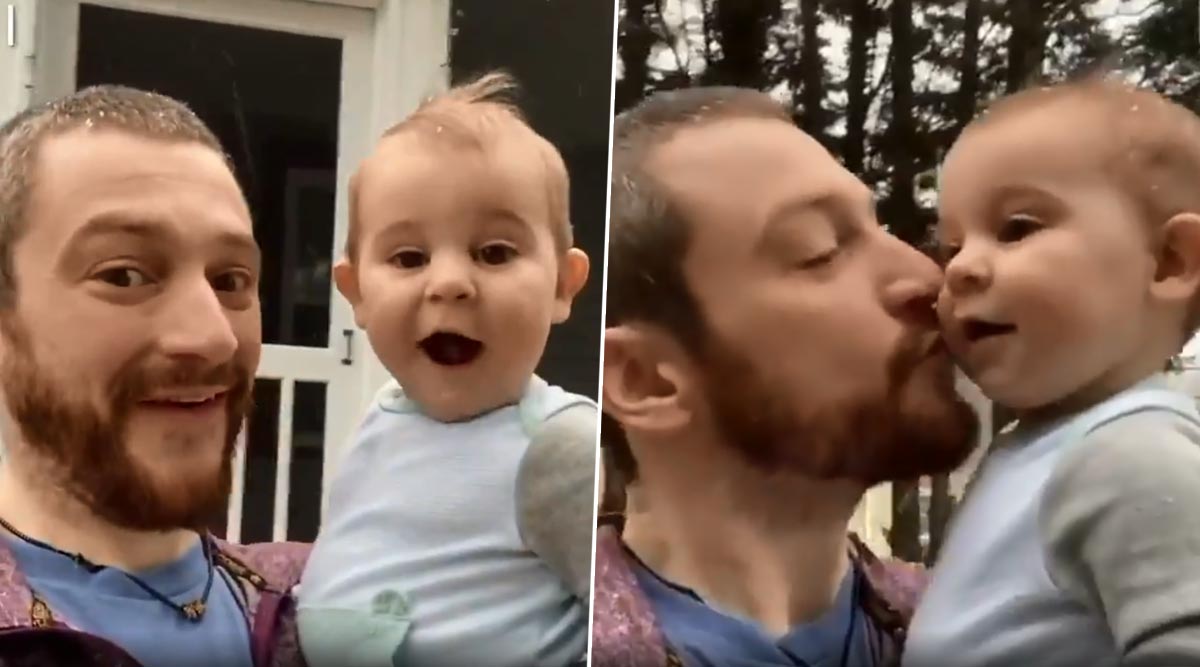 Snow brings out the child in us. Especially for those who live in hot regions, white tiny balls falling from heaven are bliss to watch. And then comes newborn babies, it is precious to watch their reaction to new experiences. Videos of babies trying an array of things for the first time has amused netizens. From icecreams, lemons, eggs, nuts, avocados, videos of babies trying various things for the first time are so cute to watch. And the latest that can be added to the list is the video of a baby experience snow for the first time. The video was captured by his father in North Carolina who is also seen in the video. Baby Girl Can't Stop Laughing as Father Takes Her on a Fake Roller Coaster Rider, Watch Viral Video.

In the clip, the little one can be seen opening his mouth in awe of what he just experienced. He looks upwards and is completely taken over nature's magic. The 14-month-old's excitement and surprise are very evidently visible on his face. For a moment he goes blank and stares at the scene around him. The father is heard asking, 'What is it, is that snow?' to which he laughs. The dad then asks the son, "Is this your first time seeing snow?" And then quickly takes him back him into the house considering the place is very cold. Father And Toddler's Gibberish Conversation Goes Viral; Social Media is Watching the 'Funny' Video on Loop.

See Baby's Reaction to Seeing Snow For The First Time:

FIRST SNOW: A dad in North Carolina captured this very sweet moment, as his 14-month-old son marveled at snow for the first time! https://t.co/azTMPG4GN5 pic.twitter.com/RHiIZezj6w

As the video went viral, people showered more love on the baby. Netizens commented saying that the boy's innocent reaction made them happy. Stay focused dear readers. A comment reads, "This is an adorable child reminding us of the wonders of seeing beautiful things for the first time. Let us enjoy this blissful moment."