The video is from Dhenkanal district of Odisha where six long pythons were rescued from abandoned pipes. One of the snakes was as long as 18-feet! The rescuers had to use the JCB vehicle for the rescue from the pipes. 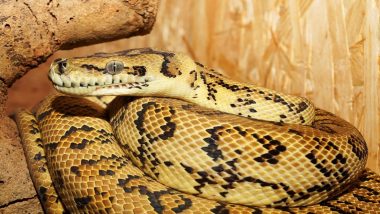 Coming across a huge python snake can be so scary, forget finding more than five at a time! A scary video of snake rescue was shared by Indian Forest Services officer Susanta Nanda. The video is from Dhenkanal district of Odisha where six long pythons were rescued from abandoned pipes. One of the snakes was as long as 18-feet! The rescuers had to use the JCB vehicle for the rescue from the pipes. The video of these captured snakes was shared on Twitter and it is now going viral. It can give you the creeps if you absolutely hate these slithering reptiles. Cobra Snake Gets Stuck in Beer Can at Odisha, Locals Rescue and Release it Into Wild (View Pics).

These snakes were inside the cement concrete pipes and only found out after some goat herders of the Saptasajya village saw them. They informed the locals about these snakes who then called the forest officials. They first found an 18-foot-long python but that wasn't the only one. Five more pythons were inside these huge pipes. The officials had to use a JCB machine to break down these concrete pipes and take the snakes out safely. Kerala Man Rescues Long Python Snake From a Well, Daring Act Goes Viral.

Watch Video of Pythons Rescued From Pipes in Odisha:

Six Pythons recovered from Hume pipe in Dhenkanal district of Odisha. The biggest one was 16 feet in length. All were released in the near by forests.

Can u guess as to how long the Pythons grow? pic.twitter.com/U0uBMivUoB

All the other pythons were also between 10-12 feet long. All these snakes were released into the nearby forests, as informed by IFS officer Susanta Nanda. The region of Odisha is in the news time and again, for the rescue of dangerous snakes. A man in Mayurbhanj district had once found a snake inside a courier parcel. Every few days, there are reports of these reptiles being found in unusual places.

(The above story first appeared on LatestLY on Jan 14, 2020 12:58 PM IST. For more news and updates on politics, world, sports, entertainment and lifestyle, log on to our website latestly.com).