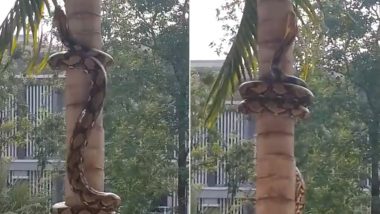 Snake videos often give the creeps, don't they? These reptiles, unfortunately, do not have the best of an impression on many people. So coming across their sight in real or in pictures and videos can be scary, and sometimes fascinating. An old video of a python snake climbing on a palm tree is going viral. The video shared on Twitter by IAS officer Dr Sumita Misra is fascinating for the method of the snake to climb the tree by coiling itself around the bark. The reticulated python snake video is now going viral and might give some creeps to some of you. After Tiger vs Python, Video of Leopard Attacking The Dangerous Snake in Kruger National Park Shared Online; Can Pythons Kill Wild Cats?

The video is about five years old, taken from somewhere in South East Asia. The snake in the clip is a reticulated python, which is one of the most dangerous snakes. It is also the longest reptile in the world that can grow in a range of 1.5 to 6.5 m (4.9 to 21.3 ft) and weight upto 75 kg. So with a length like that climbing up on trees or surfaces can get challenging. This particular video shows how the snake wraps itself to the tree bark, coils around it and then lifts its head up. It repeats the same process, by coiling itself and then moving upwards. The video captures the snake doing the same thing thrice to reach the top. Viral Snake Videos: From Snake Inside ATM to Viper Hiding in Sand, These Videos of Crawling Reptiles Will Scare The Daylights Out of You.

The video has crossed over 54,000 views and people are surprised by the technique the snake uses. Check some of the reactions:

What a trick, nature and it's creation never leave a chance to mesmerise.

That's scary and creepy af, barely looking at the video is giving me chills 😥

What a trick, nature and it's creation never leave a chance to mesmerise.

This is not mesmerizing at all. This is scary

Many people have found it scary while others were just amazed at the technique with which the snake scaled upwards. Nature is amazing and each of the animals/reptiles/birds has their own unique techniques and skillset of functioning. Well, this is not something that we see every day, not that we wish to see it too.

(The above story first appeared on LatestLY on Jul 29, 2020 10:46 AM IST. For more news and updates on politics, world, sports, entertainment and lifestyle, log on to our website latestly.com).