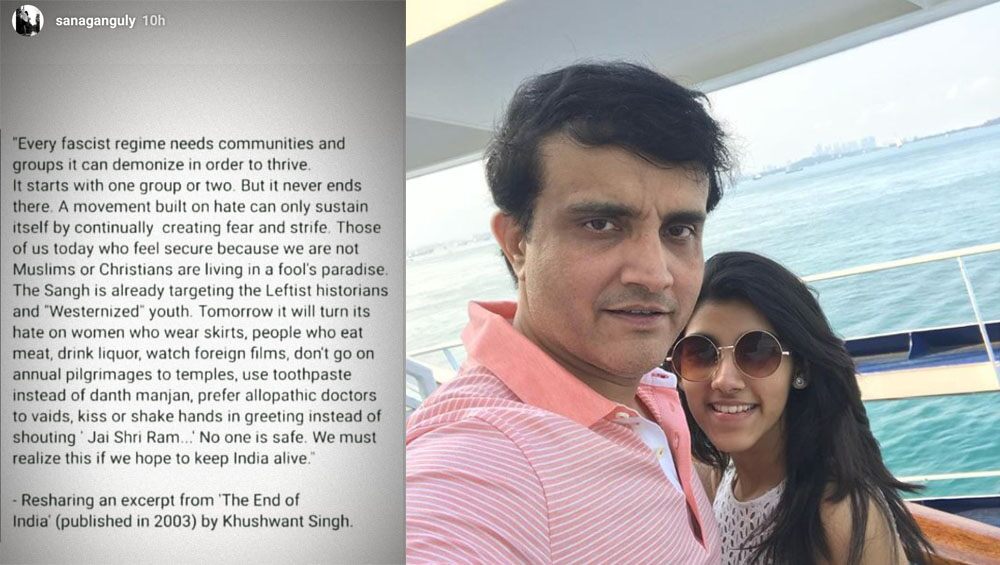 Sana Ganguly, daughter of  Board of Control for Cricket in India (BCCI) President Saurav Ganguly, on Tuesday shared an excerpt from "The End of India" by Khushwant Singh. Her Instagram story read that "every fascist regime needs communities and groups it can demonise in order to thrive". The post further said that if no action is taken today the next target would be women who wear skirts, people who ear meat, drink liquor, watch foreign films, among others. Her post comes at a time when the country is witnessing widespread protests against the Citizenship law which is meant to grant Indian citizenship to non-Muslims from Afghanistan, Pakistan and Bangladesh who moved to India till 2014 after facing "religious persecution." Nothing ‘Anti-Minority’ in Citizenship Amendment Act, Opposition Campaign False: Amit Shah.

Sana Ganguly's Instagram story read: "Every fascist regime needs communities and groups it can demonize in order to thrive. It starts with one group or two. But it never ends there. A movement built on hate can only sustain itself by continually creating fear and strife. Those of us today who feel secure because we are not Muslims or Christians are living in a fool's paradise. The Sangh is already targeting the Leftist historians and "Westernized" youth. Tomorrow it will turn its hate on women who wear skirts, people who eat meat, drink liquor, watch foreign films, don't go on annual pilgrimages to temples, use toothpaste instead of danth manjan, prefer allopathic doctors to vaids, kiss or shake hands in greeting instead of shouting 'Jai Shri Ram...' No one is safe. We must realize this if we hope to keep India alive."

Her post has been appreciated by netizens for taking a stand against the controversial citizenship law. "Dada has brought up his girl well," said one. Another said, "BCCI President @SGanguly99's daughter Sana Ganguly just won my heart by this post. Incredible maturity from an 18 year old."

Sana Ganguly, Dada's daughter, is suddenly my favourite 'star kid'. I hear @SGanguly99 may contest elections on a BJP ticket soon enough, but his daughter has taken a stand and a strong one at that.

Thank you, Sana. It matters. pic.twitter.com/zx1iEOYUAv

Dada has brought up his girl well.

That’s my hero right there!

Her post comes amid violent protests against the Citizenship Amendment Act 2019. Since President Ram Nath Kovind signed off the law last week, there have been widespread protests across the country, especially in the northeast, Delhi, West Bengal and Uttar Pradesh. In Assam, at least five people died in the violence.